Image Credit: Image by GooKingSword from Pixabay
By Dylan Mankel

We know very little about the insides of planets. For Earth, scientists have been able to use seismic waves to map out the various layers. For planets like Jupiter and Saturn, however, who are mostly made up of gases like hydrogen and helium, they have had to resort to developing computer models to understand their structures and how they may have formed. Although, in a recent paper published in Nature on July 1st, a team of astronomers discovered what could potentially be the first exposed core of a giant planet.

TESS, or the Transiting Exoplanet Survey Satellite, is a space telescope that was deployed in 2018 that looks for periodic dips in the light from a star. This dip in brightness is sometimes the result of an object, such as a planet, passing in front of the star and blocking some of its light. This is known as the transit method for finding planets. Though, unlike a traditional telescope, TESS can observe incredibly large regions of the night sky and will have surveyed the entire sky after just two years! By using the transit method, astronomers can observe much smaller planets than previously possible, and was able to discover TOI-849b, the possible planet core.

This planetary body orbits its host star in just over 18 hours and is half the mass of Saturn but packed into the size of Neptune. This makes it the densest known Neptune-sized planet to date, about the density of Earth. As a result, this puts the planet into a category that the astronomers refer to as a “Neptunian desert.” Few planets are in this group because they are difficult to form as a result of being close to their host star. 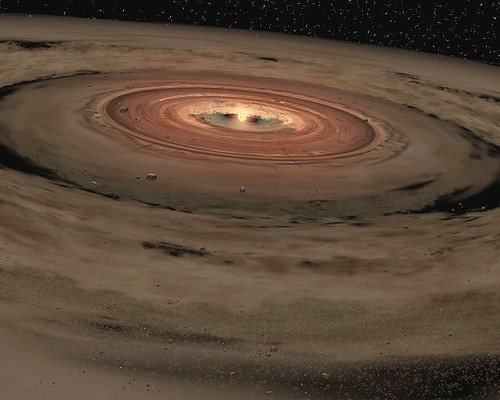 The disk formed during the birth of a new star. Planets are produced here. Source: “Twin Keck Telescopes Probe Dual Dust Disks” by NASA Goddard Photo and Video is licensed under CC BY 2.0. To view a copy of this license, visit https://creativecommons.org/licenses/by/2.0/

The astronomers produce some plausible hypotheses to explain the existence of this planet. For example, it could have become a gas giant and lost the hydrogen and helium over time. Since the planet is close to the host star, they believe this could have happened either by the stellar wind produced by the star or gravitational forces that could have ripped the gas away, leaving the denser core behind. Planetary collisions could have also occurred during the formation of the solar system that would have ejected the gas, or it may have avoided becoming a gas giant altogether by not sweeping up any hydrogen or helium in the first place. In any case, TOI-849b still represents the first object where we can directly observe the core of a gas giant planet left over from the formation of its solar system. Future observations may reveal how it formed and could challenge traditional models for planet formation.

A new understanding of weather on Saturn The Cassini spacecraft revealed the atmosphere of Saturn has large regions that don’t cycle to the poles and that the atmosphere is filled with waves that disrupt circulation.

NASA’s TESS mission discovers a planet orbiting two suns When two stars orbit each other, it is called a binary star. In 2018, NASA’s Transiting Exoplanet Surveying Satellite (TESS) mission found a planet orbiting one of these stars by detecting changes in light levels coming from the stars.

Original study: A remnant planetary core in the hot-Neptune desert

The study was done at: University of Warwick, Aix Marseille University + 45 other institutions

Raw data availability: "This paper includes data collected by the TESS missions, which are publicly available from MAST." (This is MAST)