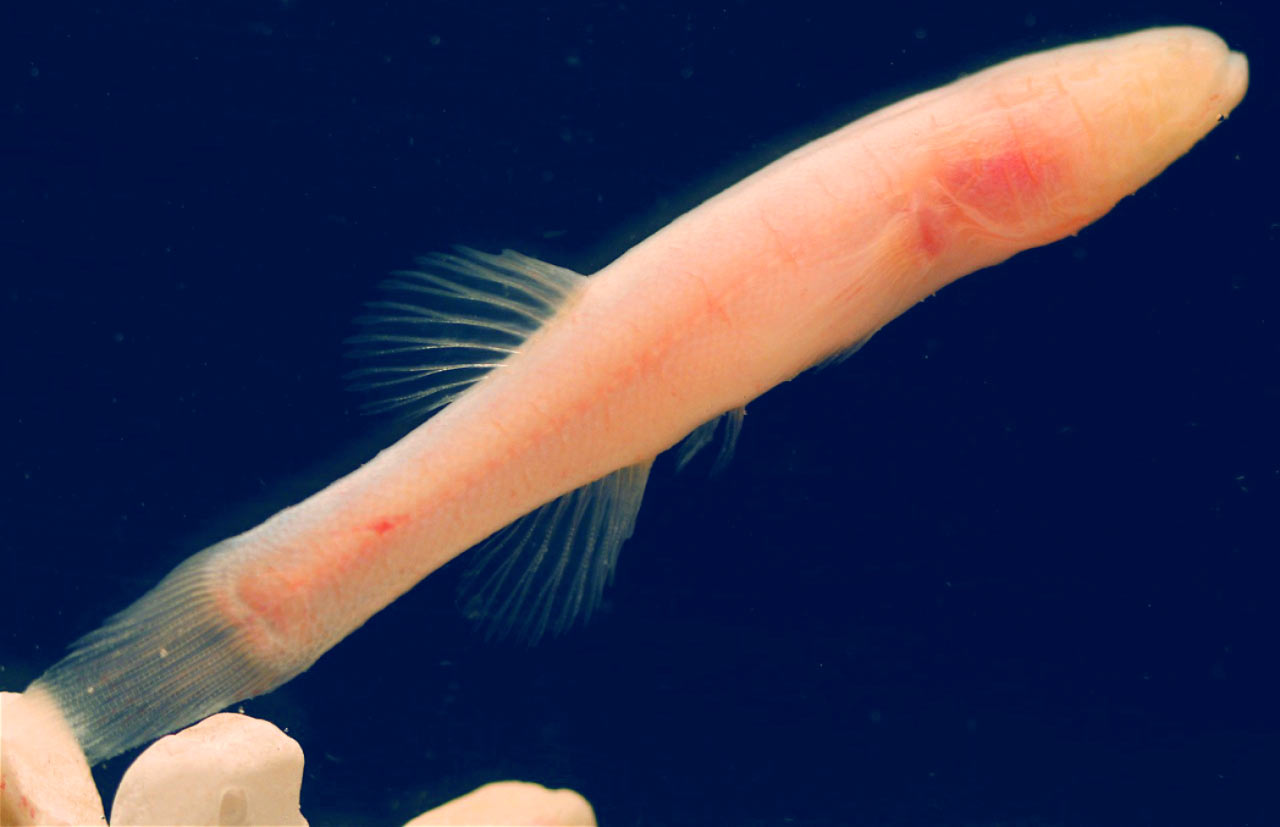 A new eyeless cavefish is described from Indiana and named after the Indiana Hoosiers. It is the first new cavefish species described from the U.S. in 40 years. Notably, it has an anus right behind its head, and the females brood their young in their gill chamber. The new species was described in the open access journal ZooKeys.

The new species, Amblyopsis hoosieri, is the closest relative of a species (A. spelaea) from the longest cave system in the world, Mammoth Cave in Kentucky. These two species are separated by the Ohio River, which also separates the states of Indiana and Kentucky. The species from south of the Ohio River, A. spelaea, has a knockout mutation in the genetic sequence of rhodopsin, a gene important in vision.

The new species, on the other hand, lacks this mutation and maintains a functional rhodopsin gene, despite lacking eyes and vision. The new species shows distinct morphological differences compared to its southern congener. It has a plumper, Bibendum-like body and shorter fins. It also has smaller mechanosensory neuromasts on papillae, which allow them to sense movement in the dark waters of the caves they are found in.

The authors decided to name the new species, A. hoosieri, the Hoosier Cavefish, not only after the Indiana Hoosiers team, but mainly to honor the proximity of the new species to Indiana University and several famed ichthyologists who worked there. “The senior author of the manuscript is a fervent fan of Indiana Hoosier basketball, but the first author is an alumni of the University of Michigan and is not. Also notable is that the middle author of the publication is currently an undergraduate at Louisiana State University.” explain the authors. Indiana University used to be the Mecca of North American Ichthyology but unfortunately it no longer has an ichthyology department. David Starr Jordan (1851–1931), The Father of North American Ichthyology, spent much of his distinguished career at Indiana University, later going on to be the first Chancellor of Stanford University. It is said that all living North American ichthyologists can trace their lineage of graduate training back to Jordan (e.g., Chakrabarty – Fink – Weitzman – Myers – Jordan).

Carl Eigenmann (1863–1927) was also one of the greatest ichthyologists and studied many blind vertebrates, while at Indiana University. It was very likely that he was actually the first person to have collected what we now recognize as Amblyopsis hoosieri. Notably, Eigenmann’s wife Rosa (1858–1947) is considered by many to be the first female ichthyologist. She and her husband described more than 100 species together.

Bulking Up: Increasing Muscle Mass in Fish with Gene Editing Researchers increase the amount of edible flesh in red sea bream by editing the gene for a hormone that restricts muscle growth