You may be like a lot of people and associate foodborne illness with eating improperly cooked meat. Did you know that raw vegetables can also carry foodborne illness? Bacteria and viruses get on produce in a variety of ways: by food handlers, contaminated water, or soil fertilized with untreated manure. Romaine lettuce grown in Arizona made the news in 2018 because of widespread E. coli contamination. Sprouts, another popular health food, have been involved in 74 outbreaks of (mostly) Salmonella since 1973. Turns out these nasty pathogens are not just reserved for chicken and beef! There is no cooking step to kill the bacteria or virus on produce before it goes into your salad. Sometimes washing doesn’t even help, so prevention is key.

Microgreens are a hot new leafy green on the market. A microgreen is the first 2 to 3-inch (5 to 7-cm) tall shoot from a germinating vegetable seed. They are grown indoors in trays or hydroponics systems in soil, soil-substitutes, or without any rooting medium at all. Scientists understand a lot about how bacteria get to leafy greens from soil, but little about contamination in indoor farms. Are indoor farms safer if they don’t use dirt? We wanted to find out. 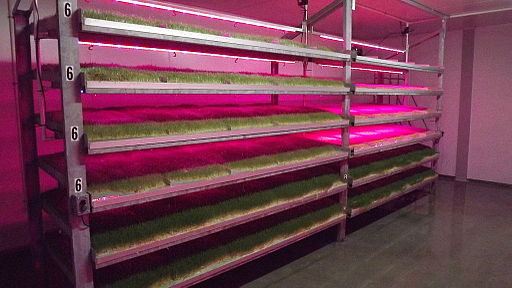 This is what a typical microgreen hydroponic system looks like. Source: Wikimedia Commons, by Kchittock0511 / CC BY-SA

Microgreen growers do use soil. However, they also use materials such as coco coir (made from coconut husks), Biostrate(TM) mats, plastic, perlite, rice hulls, and hemp in soil-free indoor systems. Our hypothesis was that if soil can transfer bacteria to lettuce, other growing materials can too. E. coli and Salmonella survived better in hydroponic nutrient solution compared to soil, so we wondered if there would also be differences among soil-free materials. Within the last few years, there have been close to 10 microgreen recalls over diarrhea-causing Salmonella and Listeria monocytogenes found during routine testing. So, we decided to compare the survival of these two pathogens among popular soil-free growing materials to see if the bacteria lived longer on any of them. 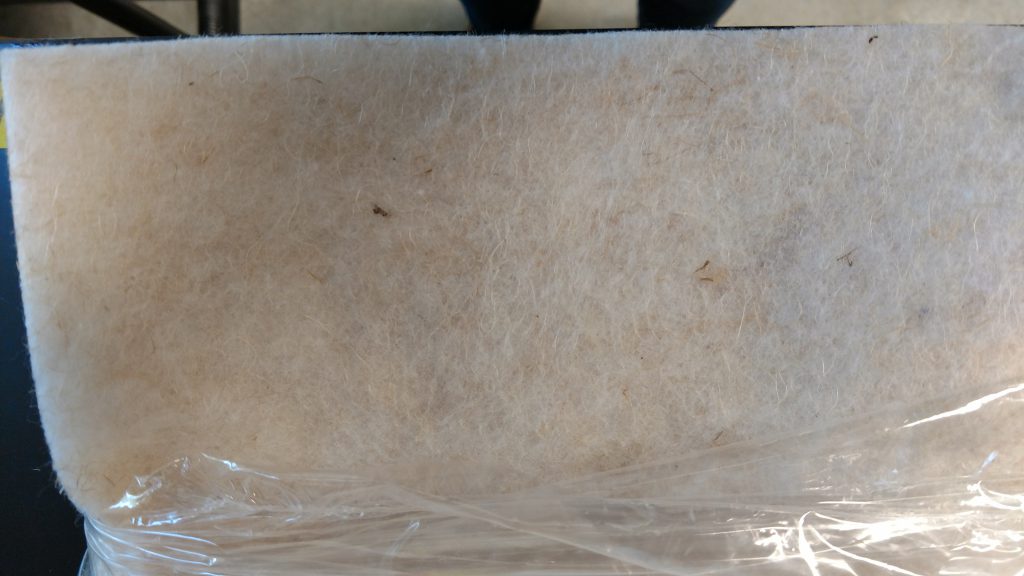 An example of a Biostrate mat. Source: The author | Creative Commons Share Alike 4.0

We watered multiple samples of coco coir, Biostrate(TM) mats, hemp mats, and peat-based potting mix and contaminated them with Salmonella and Listeria monocytogenes. To imitate microgreen growing conditions, we left them on the lab bench for 10 days. We took samples from the mats on the first day, and then at 24 hours, 3 days, 6 days, and 10 days to measure the growth of bacteria. Each sample was spread onto Petri dishes containing a gel called agar, enriched with nutrients preferred by each species. The idea behind this classic microbiology technique is that if any cells from the samples were viable, they would multiply on the Petri dishes and form colonies. The colonies are easy to see with the naked eye, and each represents one cell from the original sample.

We found out that Biostrate(TM)mats and hemp mats supported the growth of these two pathogens, while coco coir and peat potting mix did not. In fact, on Biostrate(TM) and hemp, Salmonella and Listeria levels increased after 24 hours and then maintained their original levels for 10 days. On peat and coco coir, Listeria began to die off after the third day and was undetectable on coco coir by the 10th day. Salmonella survived better on all the materials, but on the 10th day, there were 10 times fewer colonies on peat and coco coir compared to the two mats.

Both pathogens showed poorer survival on peat and coco coir compared to no media at all. That means there may be some feature of the peat and coco coir that suppresses the growth of these bacteria. Understanding if that is true, and if so, what exactly that feature is will require more experiments.

It is necessary to point out that because this experiment did not involve microgreens, we still don’t know if microgreens grown in Biostrate(TM) and hemp actually do take up greater amounts of bacteria. These tests are underway! However, this preliminary information may be useful to indoor growers. Until we know more, microgreen growers may want to avoid using fibrous mats, perform additional sanitation steps, or do more testing to keep their customers safe.

Hacking hydroponics to grow kidney-friendly vegetables Patients with kidney disease have to avoid potassium, so researchers in Italy grew microgreens in low-potassium fertilizer, potentially sparking an idea for a new food product.

Smart farms should clean their greens No foodborne illness outbreaks have yet been associated with microgreens, but recent research suggests that there is still a risk.

Growing plants with colored light changes their nutrient content Apparently, when you stress plants out by removing green light, they pump out more antioxidants!

The study was done at: University of Arkansas

The study was funded by: National Institute of Food and Agriculture, U.S. Department of Agriculture (USDA NIFA) and University of Arkansas

Raw data availability: Available from author upon request by email.