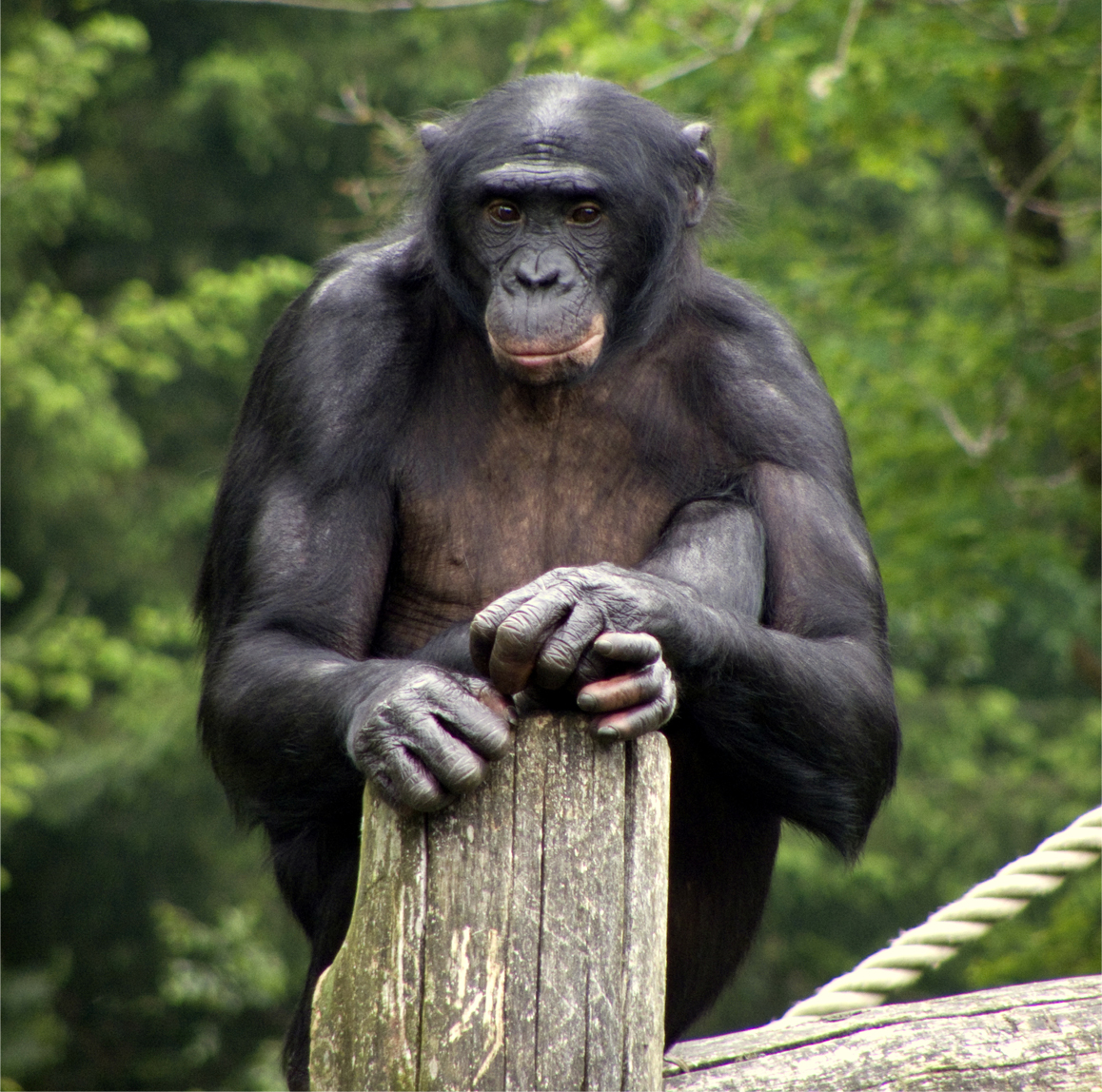 Bonobo apes are among our closest genetic relatives. Like humans, they are very social and are known to cooperate to find food. However, new research published in the journal Cell describes a key way our species differ: unlike humans, bonobos may prefer individuals who don’t cooperate.

Researchers from Duke University came to that conclusion while studying bonobo behavior at Lola ya Bonobo, a bonobo sanctuary in the Democratic Republic of Congo. The researchers wanted to know if bonobos react differently to individuals who help others and individuals who harm or get in the way of other bonobos. We know from past experiments that, even as babies, humans naturally prefer to interact with helpful people and avoid those who hurt or interfere with others. The Duke researchers were curious if bonobos also behave this way.

To answer that question, the researchers conducted several experiments. In the first, adult and young adult bonobos saw simple animated videos that represented positive and negative social behaviors. Each video showed a cartoon circle trying to move up a hill. Some videos featured a “helper” character who assisted the circle up the hill. In others, a different-looking “hinderer” character pushed the circle back down. After playing the videos, the researchers asked the bonobos for their “opinions” by having the apes choose four times between cut-outs of the helper and the hinderer (both of which were placed enticingly on top of apple slices). Adult bonobos selected the hinderer over 70% of the time, leading the researchers to conclude that those subjects significantly preferred that character for its antisocial behavior.

Next, the researchers recreated the experiment in a real-world setting. This time, instead of watching cartoons, the bonobos watched three humans interacting. One of the humans started by playing with a toy but then purposefully dropped it. The person sitting to his left tried to “help” by picking up the toy and giving it back. The person sitting to his right, though, would “hinder” them by aggressively batting the toy away. Afterward, the human helper and hinderer offered each bonobo apple slices at the same time. The bonobos had never interacted with these people before, meaning their choices wouldn’t have been biased because of familiarity. Just like in the first experiment, adults were significantly more likely to take the apple slice from the hinderer than from the helper.

These results might be surprising for a couple of reasons. For one, bonobos are well-known for sharing and working together. Why would such a naturally cooperative species be so attracted to unhelpful characters? What’s more, considering how closely our two species are related, why don’t bonobos share our preference for helpers? The researchers thought the answers to both questions might have something to do with dominance. They hypothesized that bonobos may associate traits like aggressiveness and unhelpfulness with dominant individuals. By favoring bullies, bonobos may be trying to obtain the social advantages that come with befriending the most powerful member of a community.

The researchers tested this hypothesis with a slightly different version of the first experiment. Like in that first experiment, bonobos watched a video of simple cartoon characters interacting. This time, though, the video showed two characters trying to enter a ring in the middle of the screen. One of the characters was “subordinate,” and the other was “dominant.” Whenever the subordinate character entered the ring, the dominant character immediately shoved it back out. After the movie, the bonobos again had to choose between a picture of the subordinate character and a picture of the dominant character (both placed carefully over apple slices, of course). Eighteen adult bonobos participated, and each had to make this choice four times. Overall, adult bonobos chose the dominant character in 44 out of 72 total trials, or just over 60% of the time. Only eight subjects selected the dominant character more than twice, however. From this, the researchers concluded that dominance could explain some, but not all, of the bonobos’ preference for hinderers.

Does this experiment suggest that a preference for helpers over hinderers is uniquely human? The researchers think it might, at least among primates. First, though, they say more research is needed to tell if our other close relatives, like chimpanzees and orangutans, also prefer antisocial individuals. The researchers also suggest that future studies should examine whether bonobos prefer hinderers specifically of their own species. More findings consistent with the current study might show that our natural fondness for unselfish, supportive behavior helps to separate us from even our closest primate relatives.

Edited By: Gina Riggio
Source: Bonobos Prefer Individuals that Hinder Others over Those that Help
Publication Date: January 4, 2018