In the course of human life, bone tends to remodel its structure several times, always keeping track of its shape to be strong enough for all the things our body can do. There are two important types of cells involved in the ever changing bone structure – osteoblasts (responsible for the creation of new bone tissue) and osteoclasts (responsible for the destruction of existing bone tissue). These two cell types allow our body to re-shape bone when needed.

Ionizing radiation encountered in space may be responsible for bone tissue damage and loss in astronauts and lab animals. The effects of ionizing radiation may be direct, by causing changes in specific genes responsible for the bone remodeling. It may be indirect, by increasing the production of damaging molecules called reactive oxygen species (ROS). These compounds, which contain oxygen, are able to interact with different parts of human cells, like DNA or proteins. Reactive oxygen species may play an important role in bone loss caused by ionizing radiation. Scientists tried to conduct experiments on lab animals to understand if there are some compounds or food that may prevent excess ROS production.

Researchers at NASA Ames Research Center compared the impact of different substances, including dried plums (prunes) on lab mice. Prunes are known for their antioxidant and anti-inflammatory characteristics. In particular, researchers believed that the exposure to ionizing radiation was able to cause more bone breakdown, not compensated by the osteoblast (bone-rebuilding) activity. In this study, the researchers found several master genes involved in the bone reabsorption, named Nfe2l2, Rankl and MCP1. The proteins made from these genes are given the same names, but not written in italics.

Nfe2l2 is a protein that tells your cells to make antioxidants.  It is not usually expressed unless Reactive Oxygen Species are present. At this point, it starts to accumulate in bone cells. Another protein called Rankl is usually present in osteoblasts and links to a molecule on osteoclasts, called Rank. When these two proteins combine, this interaction starts the breakdown of bone tissue. Finally, MCP1 stimulates the creation of new osteoclasts, also leading to bone breakdown. 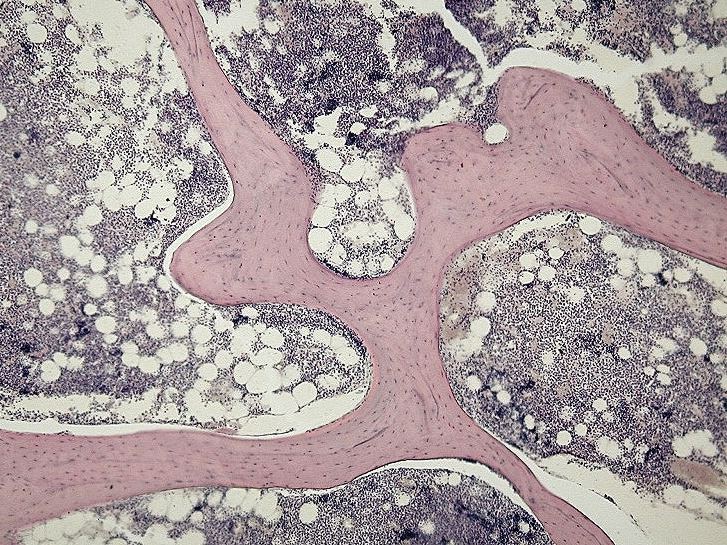 To do this experiment, mice were separated into four different groups. Two of them were used as control groups and fed a normal diet, while the other two ate the experimental diet. In addition to a basic diet, researchers also added an antioxidant cocktail (several different drugs, including ibuprofen) in the first experimental group, and a dried plum powder in the second experimental group.

Radiation can be measured in Grays, abbreviated “Gy.” For reference, a full body CT scan would expose a human to 0.02 Gy of radiation. Mice were exposed to a radiation dose of 2 Gy gamma rays and 1 Gy high-energy protons at 16 weeks of age, similar to outer space conditions. At the end of the experiment, the mice were euthanized and their body tissues were analyzed for changes in the gene expression.To do this, they used a technique called qPCR, which allows researchers to count the number of times a gene is “read” into a protein using a fluorescent dye. They also looked at the bones’ structure for signs of damage.

The team decided to investigate further which specific substances present in dried plums could have been responsible for this radioprotection. They concluded that dried plums contain polyphenols, which are chemical antioxidant substances usually found in plants. They may decrease the production of osteoclasts. These findings suggest that astronauts may be able to use dried plum powder or juice as a dietary supplement to protect their bones from radiation damage.

More Evidence for the Brain-Gut Connection It turns out, the bacteria that live in your intestine can have an impact on the region of your brain associated with anxiety and fear.

The study was done at: BMSIS, NASA Ames Research Center