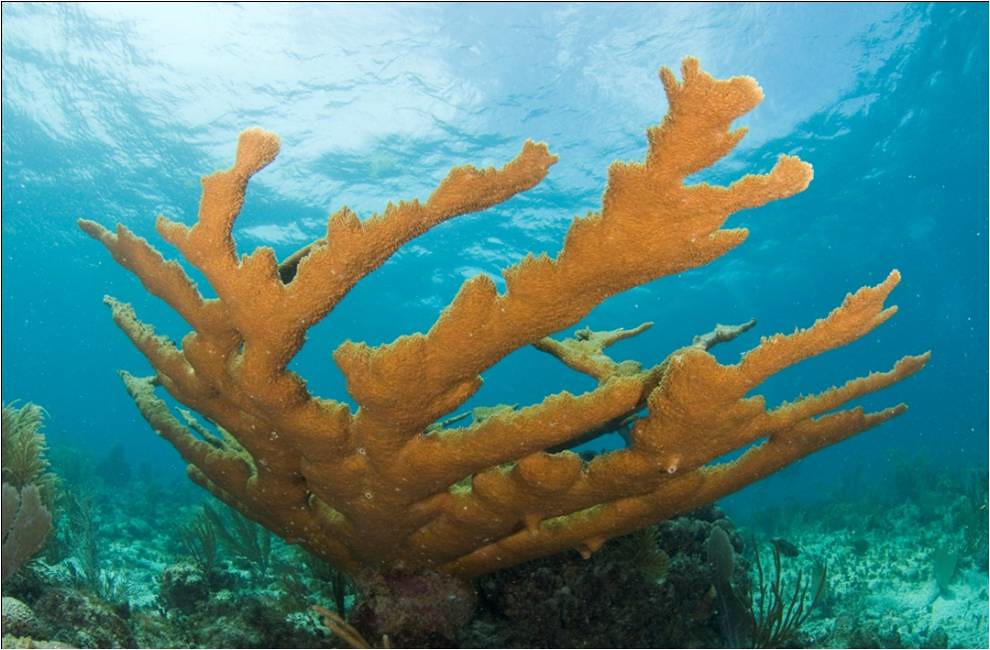 Our coral reef ecosystems, often called “underwater rainforests,” are quickly changing. Coral reefs are elaborate and complex ecosystems and even though they make up only a small fraction of the ocean, they contain 25% of all marine life. Reefs are important cornerstones in the cycling of nutrients and the base of reef life. Not only are they important for supporting a diverse ecosystem and protecting the coastline, , but they also provide tourism dollars and seafood to many coastal communities around the world.

Just as we are beginning to explore and understand their intricate ecology, coral reefs are disappearing. Problems such as overfishing, coral bleaching, disease, and ocean acidification are causing the loss of many reef ecosystems. In many places this has left behind reef skeletons known as coral rubble. Acropora palmata is one species of coral that has been hit particularly hard by the changing environment. But from loss brings new life. The sudden availability of nutrients brought about by the death of so many corals has promoted the growth of microorganisms.

Microbes are survivalists and can be found munching on an array of different substances many never thought possible. With the growing amount of coral rubble, new communities of microorganisms known as biofilms have taken up residence on the corpses of coral reefs. Just as maggots decompose and recycle the remains of roadkill, microbes are reusing the nutrients previously held in the coral reefs. But which microbes are doing this? And what does this mean for the reef?

The analysis of bacterial samples from coral rubble off the coast of the Mexican Caribbean has given insight to who has made these graveyards their home and what they’re doing.  The researchers collected environmental samples of coral rubble where bacteria are growing and extracted all the DNA present. Then, they used a technique called metagenomic sequencing, in which genes from different members of the community are sequenced and analyzed all at once. The results showed a mix of bacteria that  use nitrogen, sulfur, and carbon for energy. The processes performed by a number of these microbes result in the formation of new minerals that bind together coral rubble and create “secondary” reef structures. This means the reef is growing despite the absence of corals, and the authors think that these new reef structures could eventually help reefs grow back by providing a place for new coral to attach.

The techniques the authors used leave many gaps in our knowledge of the coral rubble communities. 24% of the DNA sequenced was unknown or too poor of quality to draw any conclusions. And of the 76% that we have information on, only 38.2% of that had an associated known function. That leaves a lot of unknown DNA sequences that could be important. Genomic analysis is still a growing field, and this study is part of a new frontier of research.

Scientists have never before seen coral reef degradation to this extent and deeper understanding will require additional research. This study gives hope that coral reefs may be able to grow back,  similar to what happens after other natural disasters such as forest fires. The reintroduction of nutrients and building of substrate by microbes could serve as a bed for new corals and algae to grow. This research demonstrates that our planet may be facing some alarming changes, but it is also resilient.