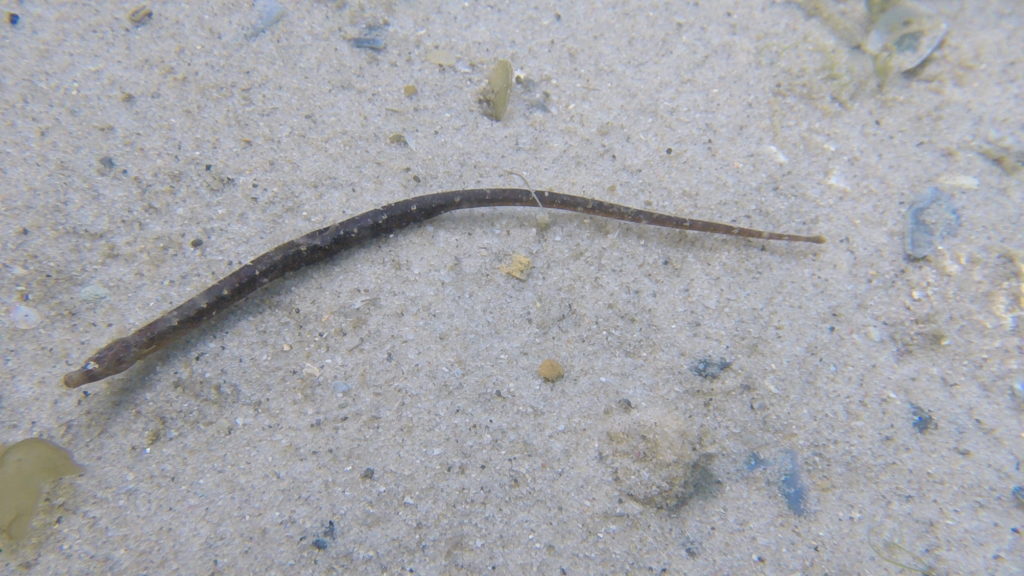 My research interests are centered on the evolutionary relationships among species of seahorse and pipefish in the family Syngnathidae through morphological study and DNA sequencing. This entails collecting and observing fish for study via scuba diving and photography in shallow inshore water in which the underwater habitat is typically characterized by silty and muddy sediment, sandy and rocky bottom, or dense seagrass beds.

Pipefish are very difficult to find in their habitat due to their cryptic appearance. They are rather small, and resemble dead or alive seagrass blades, kelp fronds, or small sticks, and depending on water conditions it’s rather easy to spend an hour or two underwater and not find one fish.

My colleague Dr. Healy Hamilton and I decided to travel to the Gold Coast in southern Queensland Australia in November 2014 to look for two species of fish that we had not yet observed, photographed, or collected for our research study. One such fish is the Tryon’s pipefish (Campichthys tryoni) which so far has only been found in southern Queensland and previously collected by local research institutions but only through deep dredging or trawling, so the chances of finding this fish would be very low. The other is a tropical pipehorse that appears to be undescribed and was photographed by local fish enthusiast and diver Ian Banks. The addition of these rare genera to our research would be beneficial since we have over 95% of currently recognized genera in our fish collections, and the DNA data generated from these fish species would give a more complete picture of the evolutionary relationships in this family.

We flew to Brisbane QLD where we picked up our rented campervan, our home for the next two weeks, and headed to our first destination, Deception Bay in Moreton Bay Park, where Tryon’s pipefish had been previously collected by boat dredging. Netting in shallow water all throughout the bay resulted in two genera and species of pipefish (Stigmatopora and Urocampus) which we had already collected before – not surprising at all since these two species have a huge distribution that range from Western Australia to Queensland.

We then headed south to our next destination, the Gold Coast area, an inlet estuary accessed by a deep water channel called the Gold Coast Seaway, itself a well known dive site known for its pelagics and tropical fish present during the summer. We concentrated our efforts first in Southport, the southern end of the Gold Coast, since our campervan holiday park was located there and the shallow water was amenable to beach seining and netting. At various sites with dense seagrass beds we netted the same species found up in Deception Bay however at one collection site, in one foot of water with low visibility in sparse seagrass next to busy marine dock, we were very surprised to find the double-ended pipefish Syngnathoides biaculeatus.

This tropical pipefish is actually a member of the seadragon family to which the leafy and weedy seadragons belong, and are found in high abundance throughout the Indo-Pacific. This syngnathid is found at this extreme southern range due to the tropical East Australian Current which transports larval or juvenile fish southward from the the tropical north. Southern Queensland is considered to be a transition zone with respect to seasonal variation of fish assemblages in which the summer brings in tropical fish to normally temperate waters.

We met local diver and fish photographer Ian Banks who runs a dive shop and has very helpful website on the local fish species found in the Gold Coast area, and who is very knowledgeable on all of the dive sites there. Great sense of humor too! He kindly and generously set up a few boat dives off of Wave Break island to explore the sandy bottom and seagrass beds where he had previously photographed a few species of tropical pipefish. Again we found the usual temperate pipefish species described above, and contributed this to the fact that we were in Southern Queensland in early summer, and the water temperature was an unseasonably low 18C, not warm enough for the tropical fish species to thrive.

We were starting to worry that we wouldn’t find the Tyroni’s pipefish which would represent an additional and new genus to our collections and genetic data. The chances were low that the undescribed tropical pipehorse would be found as well since the water was quite cool, and most likely is an ephemeral tropical visitor from the north. Over many years we have collected the majority of recognized syngnathid genera via scuba, tissue samples, museum loans, etc so acquiring the remaining, hard to find, and very rare genera for the project remains a challenge. There are only nine records of Campichthys tryoni collected in southern Queensland so we were starting to feel the pressure to find it or any new species we didn’t have in our limited time.

One of our last sites we concentrated our efforts on between seining and diving elsewhere is the well known Southwest Wall dive site, around the bend of the Gold Coast Seaway. It is an easy shore dive and is a known habitat for the endemic High Crowned seahorse Hippocampus procerus, a possible sister species to the White’s seahorse Hippocampus whitei found further south in New South Wales. The dive site is characterized by silty sandy bottom, small rocky bommies, and seagrass beds close to shore.

Ian, Healy and I each found the beautiful High Crown seahorse during our dives, all of them being found in the rocky area close to shore in three to five feet of water. It’s always amazing and surreal to observe seahorses in the wild as they blend in so closely to their environment. If you blink you might not see them again! We also found the Tiger pipefish, Filicampus tigris, another temperate species of pipefish which we already have in our collections, and has a similar distribution to Stigmatopora and Urocampus.

On our last day and dive at the Southwest Wall, we acknowledged that we weren’t going to find any new species to add to our body of research. All we found so far were previously collected species, and the probability of finding a pipefish that had been dredged in deeper water was rather low considering we were diving in relatively shallow dive sites. At the very least we had an amazing adventure looking for fish and meeting locals like Ian Banks to make our expedition that much more special. We scoured the sand, peeked under rocks, and looked at a million blades of seagrass with no luck, wishing for something new to appear.

The last five minutes of my dive before I gave up looking and resurfaced I revisited a small mound of seagrass surrounded by a sandy depression near a dense bed of seagrass. I had looked at this mound before and had not seen anything except for green grass shrimp. When I reach the mound I immediately saw it, a small dark pipefish that looked different! It had a blunt snout and small caudal fin quite unlike the genera Stigmatopora and Urocampus which have no caudal fin but a prehensile tail instead to hold on to seagrass. This pipefish was quite active on the sand in between the seagrass blades, and was absolutely beautiful to behold after seeing so many of the usual species during the trip. It most likely meandered from the nearby seagrass beds which is why I haven’t seen it before. I managed to get Ian’s attention to take a photo of it, and Healy and I gave each other a big hug underwater as an expression of gratitude and relief! At least we now know it is also found in the shallows, no dredging required!

Suffice to say we all celebrated our good fortune and fun expedition that evening with a good bottle(s) of South Australian wine 🙂 And our future trip to find the undescribed pipehorse in late summer! Thank you Healy and Ian for a wonderful adventure and expedition!