Plastic is everywhere in modern society – in food storage and preparation, electronics, furniture, and even clothing. Over time, plastics break down into very small pieces, called microplastics, which stick around in the environment for decades or even centuries. These microplastics are now found inside animals as well, including humans, potentially causing negative health effects.

To figure out what effects plastics can have on living things and how exactly microplastics cause these effects, scientists at the Shanghai Ocean University exposed discus fish to different levels of plastic pollution. The discus fish is a small, tropical fish that is often used when studying toxins because its biology is well-understood. It also reacts similarly to humans to many pollutants.

After four days, the researchers took ten fish from each tank and put them in individual tanks to watch them swim. They recorded a minute of video for each fish, counting the number of times they turned around and how fast they swam. Then they gave each fish 30 baby brine shrimp and counted how many they ate in 2 minutes. The other fish were euthanized and their brains and intestines were saved for analysis. 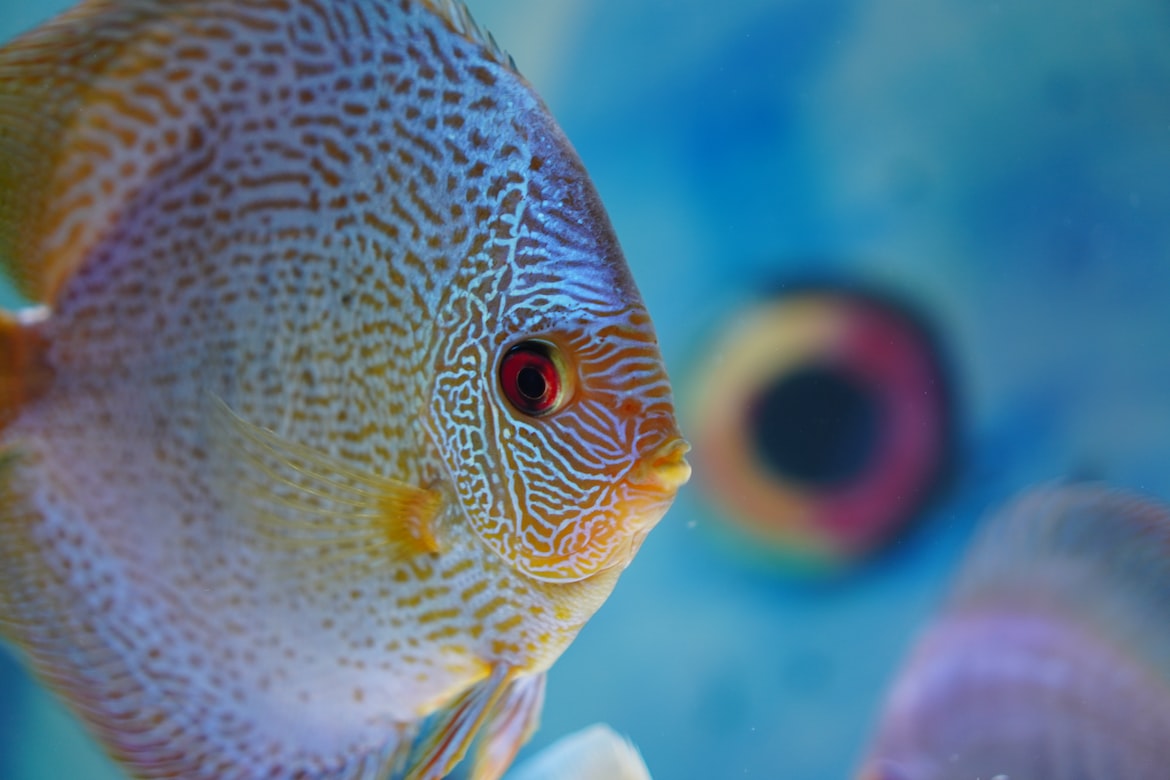 The discus fish shown above is the type used in this study. Image by Silicon Valley Fishkeeping (via Unsplash)

In previous studies, fish that consumed high levels of plastic behaved differently. Neurotransmitters tell the brain what to do, so changes in these levels could cause behavioral changes. Bacteria in the fish’s intestines produce also some neurotransmitters, so changes to the types of bacteria could also have far-reaching effects. The scientists measured how much plastic was in the fishes’ guts and also the amount of certain neurotransmitters, including dopamine and serotonin, in the brain and intestines. They separated the bacteria from the guts and sequenced their DNA, matching them up to their taxonomic family using a database of known bacterial DNA sequences.

All of the fish had about the same amount of plastic in their guts, and all five groups had a survival rate of 80% before the euthanasia. The fish exposed to low levels of microplastics grew about 10 times slower than the control group. This makes sense because microplastics are about the same size as what young discus fish eat, meaning they might think they have already eaten when they really only have plastic in their stomach. The fish exposed to high levels of microplastics had lower levels of dopamine in their gut than the control fish. Dopamine is important for decision-making and learning in fish.

The fish exposed to high levels of nanoplastics swam slower and caught fewer prey than the other groups. These fish also had higher levels of GABA, a neurotransmitter that suppresses nerve activity, in their brains. This higher than normal level could cause a slower response time, explaining the reduced ability to swim and catch prey.

The researchers suggested that the stress of consuming the plastic most likely caused an immune response, leading to the increase in this bacteria. The group of fish that consumed a high level of microplastics had higher than normal levels of Proteobacteria, which are associated with intestinal inflammation. They also had low levels of Bacillus bacteria, which produce dopamine, explaining the fishes’ lower dopamine.

Microplastics are already found in many lakes and oceans. This study showed that even very small pieces of plastic can have significant effects on the animals that consume them. This work also provides a potential explanation for how plastic in the gut can affect behavior – the plastic changes the bacterial composition of the gut, and these bacteria produce different neurotransmitters. Having different levels of neurotransmitters means the nerves are sending different messages than usual to the brain. This is important information for understanding potential effects of microplastic ingestion in all animals, including humans.

The study was done at: Shanghai Ocean University (China)