Mountain Fuel Mine, Idaho pc: Carla RosenfeldSelenium is considered an “essential toxin.” This means that selenium, in small quantities, it is required for humans and most life as part of the amino acid selenocysteine. (For the chemistry nerds, it’s a cysteine molecule with selenium attached). Yet, in large quantities it can become extremely toxic. Selenium is most toxic when dissolved in water, and least toxic when in its solid elemental form. There are two forms of selenium that are toxic when dissolved in water — selenite and selenate.

In the environment, selenium is distributed naturally through volcanic activity, but human activities have increased its levels in certain areas of the world. Coal mining, processing, and burning has especially been problematic for releasing high levels of selenium to the environment. In 2016, the United States Environmental Protection Agency presented a guideline for lakes, rivers, and groundwater to remain below 1.5 and 3.1 parts per billion (ppb) selenium for standing and flowing water. 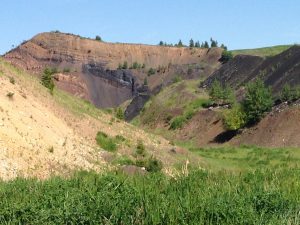 One of the Alternaria fungi was isolated from these Se-contaminated reclaimed mine areas. Photo credit: Carla Rosenfeld (Updated from previous photo)

Recently, scientists discovered that a few species of fungi commonly found in the soil have a natural ability to transform selenium from its dissolved form to a solid form. The fungi can do this in the presence of oxygen, which was surprising and useful for water treatment scenarios. To build upon this, a few scientists at the University of Minnesota wanted to test if two species fungi of the genus Alternaria could be used to remove selenium from water.

In the lab, they tested the fungi in wastewater from industrial and municipal sources. The industrial wastewater contained 2000 ppb selenium, and the municipal wastewater contained 25 ppb selenium. As a comparison and control, they also set up nutrient-rich growth media containing either 2000 or 25 ppb selenium in the form of either selenate or selenite. They grew the fungi in the wastewater in flasks on the benchtop for about a month. Using an instrument called an inductively coupled plasma mass spectrometer, they measured how much total selenium was removed from the wastewater at a few points over this 30 day timeline. At the end of the experiments, they also measured how much selenium was incorporated into the solid phase.

The fungi were also able to remove some selenium from the municipal wastewater, which was promising. Unfortunately, the industrial wastewater contained additional metals and contaminants, including lead, copper, cadmium, nickel and cobalt. These additional compounds hurt the fungi, and by the end of the experiment the fungi were shriveled flakes at the bottom of the flasks.

To remedy this, the scientists thought that adding an additional carbon source might give the fungi what they needed to perform well. In a smaller experiment, they gave the fungi growing in wastewater additional carbon in the form of either carbohydrate or glycerin. They again set up growth media comparisons to examine how well the fungi did in a controlled setting versus the wastewater experiments. They found that the carbohydrate-based carbon source did help the fungi to remove more selenium from the municipal wastewater. This result is promising for using fungi in future water treatment strategies.

Additionally, the scientists discuss that typically selenium solids are usually sent off to a landfill, which is expensive and wasteful. The authors suggest that because the fungi transform the selenium from a dissolved phase to a solid phase, that the solids could be collected and reused in biotechnology scenarios or repurposed as feed for livestock in selenium-poor environments. While the results of the study were not exactly as the scientists hoped, they suggested that in the proper setting and with the new knowledge from this current study, these fungi have immense potential for cleaning up selenium polluted environments.

Using Reishi mushrooms to filter methane out of the atmosphere Both living and dead fungi were tested for their ability to capture methane from the atmosphere. Surprisingly, dead fungi performed the best and have high potential for reducing methane levels.

Can some fungi clean up plastic pollution? Some fungi growing on plastic debris in Lake Zurich are capable of breaking down certain types of plastic

Cheese, wine, and …. fungi? Fungi play a major role in the making of some of our favorite foods, like cheese and wine. Even though yeast, the fungi behind the fun, is commonplace in the environment, we don't actually know everything about it.

The study was funded by: National Science Foundation (NSF) CAREER Award, Environment Industrial Partnership Bioremediation Seed Grant from the MnDRIVE Advancing Industry, Conserving Our Environment program at the University of Minnesota, Geosyntec supported their participation in the project through a grant from their Technical Advisory Committee (TAC)