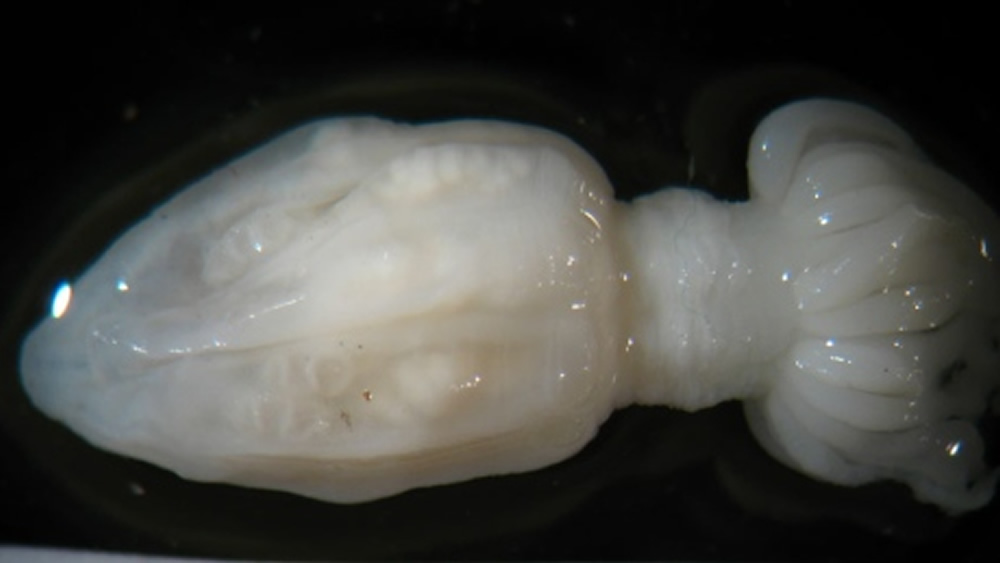 Using a camera-equipped robot to explore beneath the Ross Ice Shelf off Antarctica, scientists and engineers with the Antarctic Geological Drilling (ANDRILL) Program made an astonishing discovery.
Thousands upon thousands of small sea anemones were burrowed into the underside of the ice shelf, their tentacles protruding into frigid water like flowers on a ceiling.

“The pictures blew my mind,” said Marymegan Daly of Ohio State University, who studied the specimens retrieved by ANDRILL team members in Antarctica. The new species, discovered in late December 2010, was publicly identified for the first time in a recent article in the journal PLoS ONE.
Though other sea anemones have been found in Antarctica, the newly discovered species is the first known to live in ice. They also live upside down, hanging from the ice, compared to other sea anemones that live on or in the sea floor.

The white anemones have been named Edwardsiella andrillae, in honor of the ANDRILL program. The discovery was “total serendipity,” said Frank Rack, executive director of the ANDRILL Science Management Office at the University of Nebraska-Lincoln and associate professor of Earth and atmospheric sciences at UNL.

“When we looked up at the bottom of the ice shelf, there they were,” he said.
Scientists had lowered the robot, a 4 1/2-foot cylinder equipped with two cameras, a side-mounted lateral camera and a forward-looking camera with a fish-eye lens, into a hole bored through the 270-meter-thick shelf of ice that extends more than 600 miles northward into the Ross Sea from the grounding zone of the West Antarctic Ice Sheet.

Their mission, financed by the National Science Foundation in the U.S. and the New Zealand Foundation for Research, was to learn more about the ocean currents beneath the ice shelf and provide environmental data for modeling the behavior of the ANDRILL drill string, Rack said. They didn’t expect to discover any organisms living in the ice, and surely not an entirely new species.
The discovery indicates that, even after 50 years of active U.S. research, more remains to be studied about the southernmost continent, said Scott Borg, head of the Antarctic Sciences Section in the NSF’s Division of Polar Programs.

“Just how the sea anemones create and maintain burrows in the bottom of the ice shelf, while that surface is actively melting, remains an intriguing mystery,” he said. “This goes to show how much more we have to learn about the Antarctic and how life there has adapted.”

Rack, who is U.S. principal investigator for the environmental surveys that were conducted as part of the international ANDRILL Coulman High project, had left the site just prior to the discovery. He was listening by radio when he heard the report from the robot deployment team — engineers Bob Zook, Paul Mahecek and Dustin Carroll — who began shouting as they saw the anemones, which appeared to glow in the camera’s light.

“They had found a whole new ecosystem that no one had ever seen before,” Rack said. “What started out as a engineering test of the remotely operated vehicle during its first deployment through a thick ice shelf turned into a significant and exciting biological discovery.”
In addition to the anemones, the scientists saw fish that routinely swam upside down, the ice shelf serving as the floor of their undersea world. They also saw polychaete worms, amphipods and a creature they dubbed “the eggroll,” a 4-inch-long, 1-inch-diameter, neutrally buoyant cylinder that seemed to swim using appendages at both ends of its body. It was observed bumping along the field of sea anemones under the ice and hanging on to them at times.

The anemones measured less than an inch long in their contracted state — though they get three to four times longer in their relaxed state, Daly said. Each features 20 to 24 tentacles, an inner ring of eight longer tentacles and an outer ring of 12 to 16 tentacles.

After using hot water to stun the creatures, the team used an improvised suction device to retrieve them from their burrows. They were then transported to McMurdo Station for preservation and further study.
Because the team wasn’t hunting for biological specimens, they were not equipped with the proper supplies to preserve them for DNA/RNA analyses, Rack said. The anemones were placed in ethanol at the drilling site and some were later preserved in formalin at McMurdo Station.

Many mysteries remain. Though some sea anemones burrow into sand with tentacles or by expanding and deflating the base of their bodies, those strategies don’t seem feasible for ice. It is also unclear how they survive without freezing and how they reproduce. There is no evidence of what they eat, although they likely feed on plankton in the water flowing beneath the ice shelf, Daly said.

Rack said a proposal is being prepared for further study of this unusual environment using a robot to explore deeper in the ocean and further from the access hole through the ice. NASA is helping finance the development of the new underwater robot because the Antarctic discoveries have implications for the possibility of life that may exist on Europa, the ice-covered moon of Jupiter.

He said researchers hope to return to Antarctica as early as 2015 to continue studying the sea anemones and other organisms beneath the ice shelf.