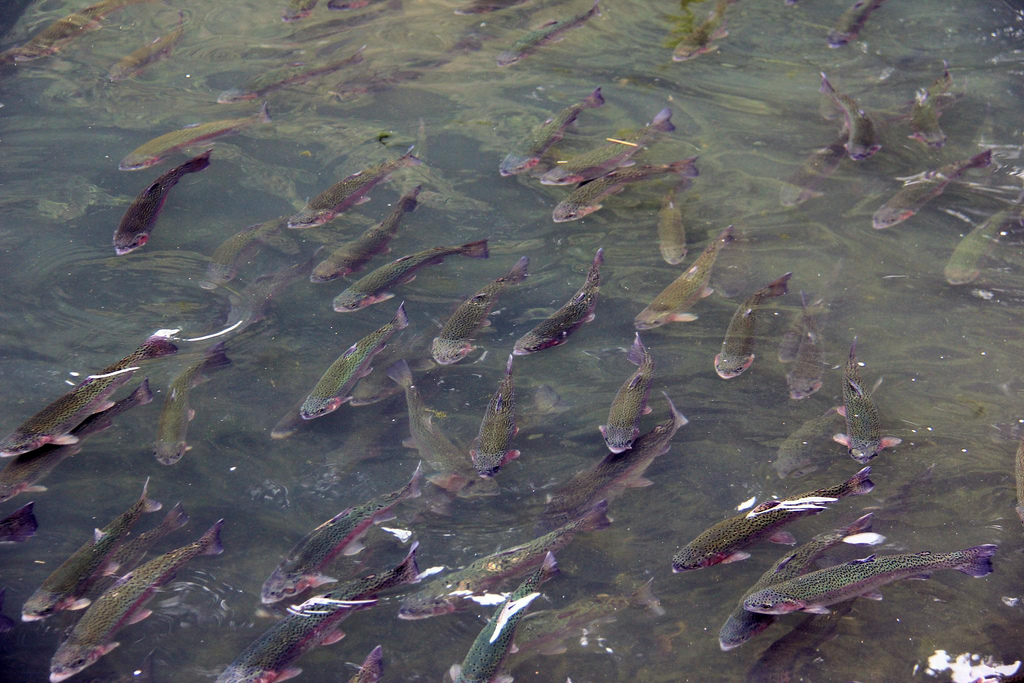 Researchers at the Swedish University of Agricultural Sciences have successfully implanted bio-loggers into farmed rainbow trout to monitor them in real time and natural conditions. Bio-loggers are small, bullet-shaped sensors that are about 13 cm or 1.5 inches long and can measure heart rate and temperature from inside an animal for 18 months. The researchers also measured cortisol, the stress hormone, before and after introducing stressors to verify how accurately heart rate correlates to stress in rainbow trout. This study was the first time scientists implanted farmed fish with bio-loggers.

Fish can be very difficult to study due to their underwater habitat and uniform physical appearance, making them difficult to monitor at an individual level. Usually fish are tested by removing them from the water, which stresses the animal out and can only last for a couple minutes at a time. Therefore, these tests only provide a snapshot of the fish’s condition and may not provide an accurate picture because they are under physically tough conditions. Testing the fish out of water also means that the researchers have to wait for several hours or days before testing again because the fish could suffer beyond ethical limits and even die. This makes it hard to take measurements of things like heart rate or temperature where an average of frequent, repeated measurements on the same animal would provide the most accurate value. Monitoring stress in farmed animals is important for the health of the animal and to ensure quality production. Stress negatively affects the quality of the final products in terms of taste and texture. As such, measuring heart rate can be used as a proxy for the amount of stress the animal is experiencing. In general, the higher the heart rate, the more stressed the animal is.

The first step of putting the bio-loggers in the fish was to do a preliminary study to find the best position for the sensor. The optimal position for measuring heart rate accurately without harming the fish was when the sensor was placed horizontally between the two front fins, pointing towards the head. With the best position determined, they implanted bio-loggers in 20 fish and placed them in a net cage. After 4 days of recovery, the scientists observed a circadian rhythm in the heart rates of the trout. This rhythm was normal and indicated that the fish had fully recovered from the stress of surgery.

The researchers then took measurements of heart rate and cortisol over a 2 day period. The fish were recorded when they were swimming normally around the sea cage, experiencing a moderate increase in the density of fish, an additional increase in density, after being scooped into a transport boat, in the boat while moving and after it stopped, after being moved to the slaughterhouse holding tank, while in the holding tank right before slaughter, and while they were being euthanized with CO2.

The heart rate of the trout was shown to increase during most of the stressful events, but it decreased when being loaded into the boat and while the boat wasn’t moving. This was because the oxygen level in the water was low during those times, and fish decrease their heart rate when oxygen is low. After the oxygen increased again, their heart rates increased significantly above normal. The increased level of cortisol showed that all these events were stressful to the fish and that the holding time before slaughter was not long enough for the fish to return to normal levels.

Evidenced by the study, heart rate can provide a somewhat accurate estimate of stress in farmed rainbow trout when oxygen levels in the water are normal. Measuring heart rate and body temperature together can better estimate the effect of stress on the metabolism of the fish. A high metabolism is undesirable for farmers because the fish will need more food and grow slower. Animal welfare is an increasingly important factor in consumers’ decision-making, and fish farmers could make their products more popular (and potentially charge more) if they can say that their farming practices are less stressful than others. The bio-loggers would allow farmers to continuously estimate the stress level of their fish without having to take them out of the water after the initial surgery. Being able to determine when and how stressed fish are in an accurate manner could help farmers optimize their methods and recovery times to produce the best quality and most relaxed fish possible.

1114400cookie-checkImplanting sensors in fish to monitor their stress levels in the wild Measuring heart rate continuously can show how long it truly takes for fish to recover from stressful events.yes

Original study: The final countdown: Continuous physiological welfare evaluation of farmed fish during common aquaculture practices before and during harvest

What is a fish’s favorite color? Raising fish in certain colors of tanks can cause stress, aggression, or undesirable color patterns. The best color for raising fish varies by species and life stage, but some groups follow general patterns.