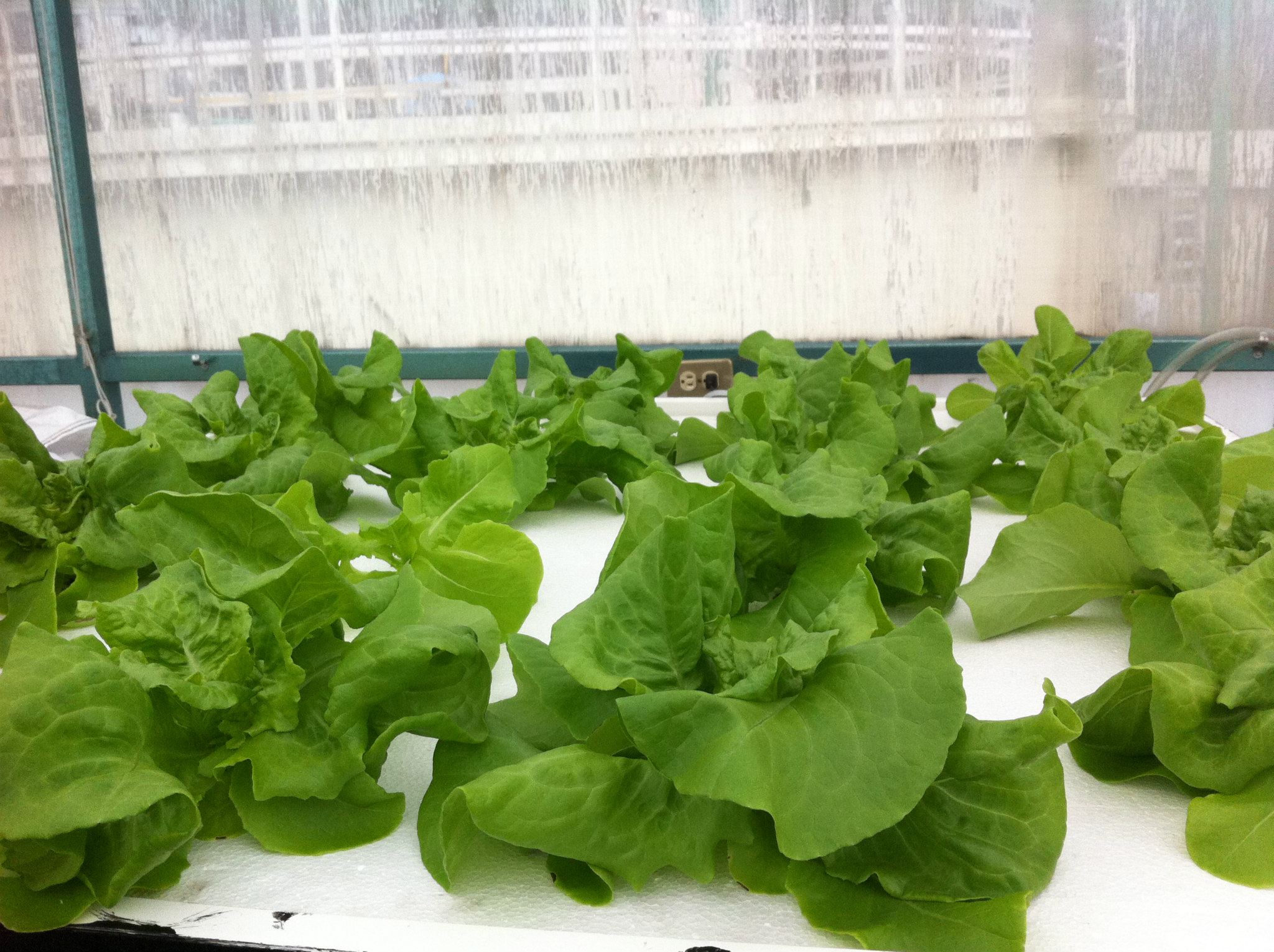 A group of agricultural researchers at West Virginia University wanted to find out if it was possible to grow lettuce year round using high tunnel aquaponics instead of traditional greenhouse methods. Aquaponics is a term that combines “aquaculture,” the practice of farming fish as livestock in managed bodies of water, and the term “hydroponics,” a plant growing technique that uses a nutrient mix dissolved in water and clay or glass beads instead of soil. There are many different types of hydroponic and aquaponic systems.

The most common aquaponics technique is the recirculating aquaponic system. Recirculating aquaponics requires minimal water replenishment as the water flows from the fish to the plants and back again in a “closed loop” configuration. Along the loop, fish live in a pond and go about their business. Their waste products build up in the water in the form of nitrogen compounds like ammonia. When dissolved in water, these nitrogen compounds make excellent fertilizer for plants. The nitrogen rich water is then sent through a sponge lined with bacteria that convert the ammonia into a form that the plants can use – nitrates! Nitrates are the main ingredient of commercial fertilizers like Miracle Grow and also come from compost and manure. Next, powered pumps force the water through the rows of plants, bathing their roots in nutrition. The plants consume the nitrates and return clean water to the fish.

The style of aquaponics system used in this study is called a “flow through system”. It works exactly how it sounds; the water flows through the plants but does not return to the fish. This method is useful for outdoor settings where natural bodies of water with fish already exist. Fish in their natural habitat are already adapted to their environment, lifting the burden on the grower to artificially supply the optimal living conditions. That can be expensive and energy intensive, especially in temperate regions that have four seasons.

Lettuce comes in many varieties and is also a popular crop — Americans eat 23 pounds of lettuce per person annually! The researchers hoped to be able to use the fish waste to boost their lettuce production and grow all year, instead of just during the warmer months. Lettuce is not particularly cold tolerant, so being able to produce it year round to meet the demand is a both a logistical and economic challenge for farmers.

To take advantage of outdoor waterways while controlling the air temperature, a high tunnel was used. A high tunnel is like a greenhouse, only moveable. It consists of a metal frame in the shape of a tube, and across the metal bones of the high tunnel is stretched an insulating plastic material. Think of it like a giant crop tent. The high tunnel does not require a foundation like a greenhouse, which is a more permanent structure, and thus can be placed over outdoor plots during colder months. High tunnels also allow farmers to shift growing locations easily and avoid wearing out the soil.

Researchers conducted their experiments using rainbow trout from a nearby spring and Red Sails lettuce. Crop production data was analyzed by weighing the lettuce produced during each season, but to make sure the data was reliable, scientists also measured light intensity and air temperature throughout the experiments. These factors can also influence yield, so they were sure to keep track of them during the experiment. The results were quite promising! They showed that lettuce production year round is indeed possible with flow through, spring-fed, high tunnel aquaponics, but winter yields were still too low for their needs. Most notably, however, they were able to grow 26 times more lettuce in the same amount of space using the aquaponics system compared to the field techniques used in previous years!

Sustainable farming methods such as recirculating and flow through aquaponics are making a splash in urban agriculture as well as in traditional agricultural circles. These techniques can be adapted for both indoor and outdoor operations. They also could be applied to food production in long term space flight, or as a way to save areas that can no longer grow food due to climate change. These applications have their shortcomings that critics are not shy to mention, primarily their energy demand. However, if the crop yield can be increased in areas that otherwise struggle with famine, the high energy cost may be well worth it.

New Study Elaborates on What Aquarium Owners Already Know Aquarium owners know that the right bacteria are critical for a healthy fish tank. But which bacteria are the right ones?