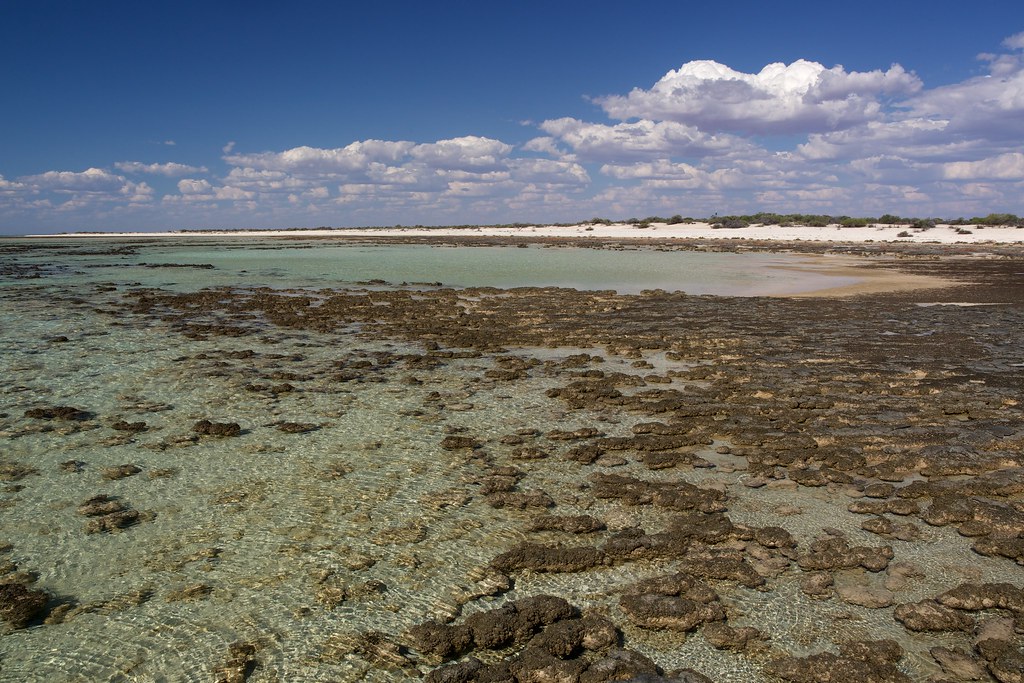 One of the biggest questions in science is how life on Earth began. We know that even the most complex living beings have humble origins as single cells. But how can we know for certain what these single celled communities were doing 2 to 4 billion years ago? And further, why might understanding more about the origins of life on Earth be critical to the quest of finding life on other planets? To help figure out these questions, scientists have been researching the complex interactions of microorganisms living in mat-like structures that have some of the most ancient ancestors on Earth.

Sort of like a fossilized microbial lasagna, fossils called “stromatolites” are formed when layered communities of different types of bacteria trap sand, dirt, and debris in their structure over time. Stromatolites are found in rocks as old as 3.5 billion years, and containing the planet’s earliest life forms. Understanding more about these layered bacterial communities  is key to interpreting the history of life on our planet. Stromatolites are still around today, and we can study them for clues about ancient life.

In this study, Linda Jahnke and David Des Marais from the Space Science & Astrobiology Division of NASA’s Ames Research Center focused on stromatolites that live in a shallow marine pond with very high salt content. They analyzed different chemical clues to determine how the microorganisms in stromatolites might leave their mark in the rock record.

One technique the NASA scientists used was stable carbon isotope analysis. This technique takes advantage of the fact that there are actually different types of carbon atoms in nature called “isotopes.” The amount of each type found in a biological sample can be used to track how carbon is cycled through an ecosystem. Different life forms can create distinctive patterns in the ratios of these isotopes. The researchers in this study wanted to see if isotope ratios from the different layers of a stromatolite might tell us something about the microorganisms that formed them.

The researchers also analyzed carbon-rich compounds called lipids. Lipids are oily molecules found in the membranes of cells, and certain lipids can stay intact for millions and even billions of years. By tracing the amounts of different carbon isotopes found in lipids, the researchers hoped to better understand how the modern stromatolite ecosystem functions and how we might use that information to better understand preserved evidence in the rock record.

The study found that stromatolites are like big cooperative office buildings of bacteria sharing resources. The carbon isotopes in the different layers were distinct from each other, and that some specific lipids reflected how different microbial species “eat”. In the top layers of the mat, microbes do photosynthesis (like plants!)  using sunlight and air and making oxygen. When these organisms die, they are eaten by other types of organisms in the lower layers that produce carbon dioxide. In the bottom layers where there is no oxygen, bacteria have to use different metabolic processes to survive. Certain bacteria were found to be doing a modified kind of photosynthesis that does not generate oxygen and uses the carbon dioxide produced by the microbes above along with sulfur compounds deeper in the mat. Certain lipids were found in these lower layers that directly correlate to the kinds of organisms living there, and those lipids contained a unique blend of carbon isotopes.

By understanding more about the variety of interactions that take place in modern stromatolites, we can begin to expand our knowledge of how microorganisms might leave their thumbprint in the geologic record. This study showed that techniques can be used to figure out what bacteria are capable of in modern stromatolites, and how that might be recorded in ancient stromatolites. Diverse organisms that use alternate methods of eating and breathing that don’t rely on oxygen might be similar to life, if any, on other planets that might not be as hospitable as Earth’s surface. Analyzing stable compounds related to these types of organisms, like the ones from this study, are promising avenues for exploration of our planet and planets beyond.