Tardigrades, popularly known as water bears, are tiny animals that can survive extreme pressure, heat, cold, and radiation which would be lethal for many other creatures. They’ve also survived in the extremes of space. There are around 1300 known species of tardigrades and they use various biological mechanisms to cope with the harsh conditions they find. For example, the species Ramazzottius varieornatus produces something called damage suppressor proteins to protect itself from extreme radiation. 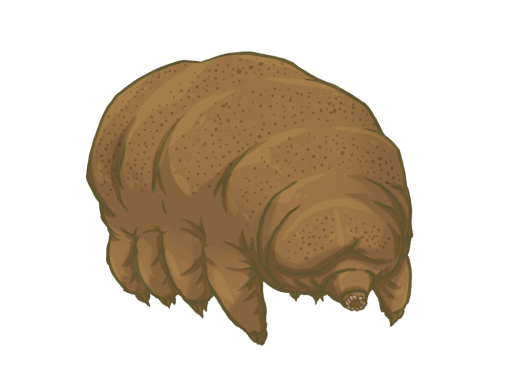 This is an artist’s rendition of a tardigrade. It’s microscopic, but perhaps you can see why it is called a “Water bear.” Source: Wikimedia Commons

Researchers at the Indian Institute of Science (IISc) have discovered a new species of tardigrade that has a different mechanism to protect itself from harmful UV radiation. They named it Paramacrobiotus sp. BLR, where BLR stands for Bangalore — the city where it was discovered. The researchers first isolated these tardigrades from moss samples taken from the trees inside the IISc campus and figured out ways to grow and breed them in a laboratory. They exposed the tardigrades to various stresses and noticed that Paramacrobiotus sp. BLR can tolerate extreme UV radiation and can survive for several days without water. Observations showed that there are two variants in the same species — a reddish-brown variety, and a variety that is colorless but develops color within 10–20 days under laboratory conditions.

In the experiment, tardigrades were exposed to UV radiation for 1 hour. All colorless specimens died within 20 days, whereas 60% of the reddish-brown ones survived for more than a month. The tardigrades were then crushed, not unlike making a smoothie, and then an extract was prepared from this puree.

The extract of colored tardigrades glowed under UV light — just like “glow in dark” stickers — while colorless ones showed comparatively less fluorescence. The researchers also found that Hypsibius exemplaris, a different species of tardigrade that is sensitive to UV, does not show any fluorescence. This finding suggests that fluorescence is necessary for radiation tolerance and is linked to the reddish-brown pigment.

This is how the scientists set up the experiment. Image credit: Anurup Mohanty

These sets of experiments show that Paramacrobiotus sp. BLR is naturally fluorescent, and that ability protects it from lethal doses of radiation. The fluorescence can also be isolated to be used as a UV shield. Researchers speculate that these tardigrades have evolved with such properties to cope with the summers of southern India where the UV index can go up to 10, which is considered extreme.

Researchers who study this kind of thing do so because it helps us understand how life can survive in extreme environments. Then, we’ll know what to look for in the search for life in places in the universe that are much more harsh than Earth.

Tardigrades help us understand if rocks can be vehicles for life Scientists exposed tardigrades to high shock pressures to test the hypothesis that they could survive a ride on rocks from one planet to another.

How stars can limit life in the universe For the past few decades, scientists have been looking at planets outside of our solar system to see if they could host life. Now, scientists have discovered another factor for habitability: radiation from the planet’s central star.

The Genetic Origins of the Water Bear, Earth’s Most Resilient Organism What are the genetic mechanisms that allow tardigrades to survive such extreme conditions?

The study was done at: Indian Institute of Science, Bengaluru, India.