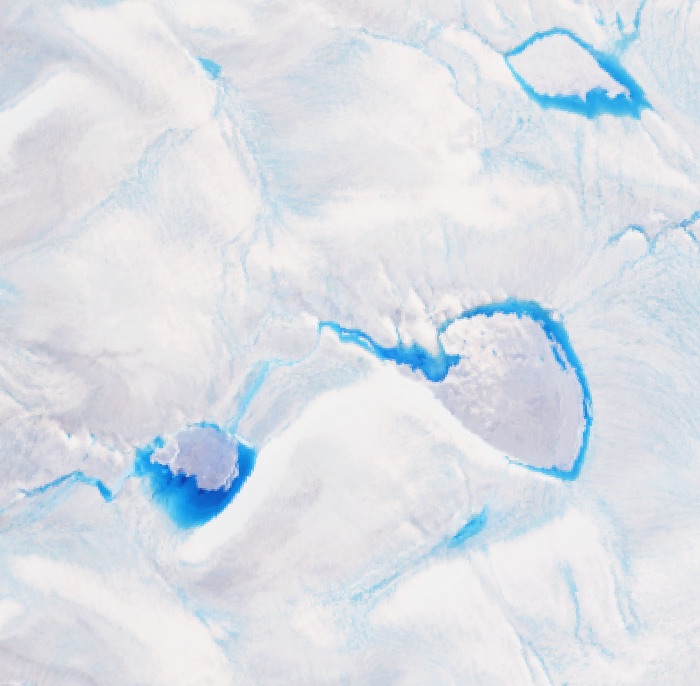 How is the Greenland Ice Sheet like an oil drill site?  They both host the process of fracking, which is the use of high-pressure fluid to enhance existing cracks.  In an oil field, high-pressure drilling fluid widens and deepens cracks in oil-bearing rocks, opening access to more deeply buried fossil fuels.  On the Greenland Ice Sheet surface, meltwater fills cracks in the ice.  Water is more dense than ice, which creates pressure that pries the cracks open.  If there is enough water, a crack can reach the bottom of the ice sheet, opening a path for surface water to flow down to the bottom of the ice sheet.  Previous observations show that water flows through these ice fracking sites faster than it flows over Niagara Falls.

Hydrofracture occurs at tens of thousands of sites on the Greenland Ice Sheet each summer, yet the combined effect of this lubrication on sea level is rather small.  This is because under many or all of these hydrofracture sites, there are already significant amounts of water — like on an already-wet waterslide, more water makes the waterslider go only marginally faster.  The effect would be much greater if you added the same amount of water to a dry waterslide.  So, what if hydrofractures at new locations on the ice sheet were to carry water down to dry beds, where the ice sheet is not currently lubricated along its bed?  Like a person on a dry waterslide, the ice sheet could speed up significantly if water were introduced there.  But can ice sheet fracking occur above a dry bed?  This question is one of the largest unknowns that limit society’s ability to predict the sea level contribution from the Greenland Ice Sheet.

To investigate whether hydrofractures can form above a dry bed, Kristin Poinar, a graduate student at the University of Washington, and colleagues analyzed how surface water reaches the bed through hydrofractures in the first place.  Every summer, meltwater forms rivers and streams on the surface of the ice sheet that carry the water downhill into large puddles, or supraglacial lakes — lakes that form on top of the ice.  These lakes, which are usually pond-sized, provide reservoirs of fluid that can pry an existing crack, or (equivalently) a crevasse, open to the bottom of the ice sheet.

Poinar identified two key ingredients in ice sheet fracking: (1) a reservoir of water, and (2) a crevasse for it to flow into.  The first requirement is a given: as the climate continues to warm, more ice will melt and pool up in lakes.  In fact, there has already been an increase in the number of supraglacial lakes since the first satellite-based photographs of the ice sheet were taken forty years ago.  Observations show that these lakes are forming at higher elevations on the ice sheet as temperatures increase — they are steadily marching inland toward areas that might have dry beds.

The background satellite photo shows three of these lakes at 1600 meters elevation — a colder area relatively high on the ice sheet where, before about 1990, there was minimal melt and lakes were not observed.  This July 2014 photo shows that lakes are now forming in this area.  However, these lakes have an interesting feature: they are covered in ice.  The ice caps indicate that these lakes spent the winter on the ice sheet — in other words, they hold water from last summer that failed to escape to the bottom of the ice sheet by hydrofracture.  This photo is broadly representative of higher-elevation lakes across much of the ice sheet.  In short, supraglacial lakes are forming at high elevations, but the evidence suggests that they do not form hydrofractures.  Why are these lakes different?

The key to this mystery is that high elevations may lack the second requirement for hydrofractrure: cracks.  Crevasses generally form where the ice flows over hills because the surface of the ice sheet stretches as it flows over the hill.  Large hills may cause the brittle ice to crack open, like an accordion.  The smaller the hill — or, equivalently, the thicker the ice over the hill — the less likely the ice is to crack.  This is because, like the Princess and the Pea, it is hard for a thick ice sheet surface to “feel” the pea when it is buried under a thick stack of mattresses.  The Greenland Ice Sheet mattress stack is thin near the coast (low elevations) and gradually thickens toward the interior (high elevations).

By analyzing the surface movement of the ice sheet, Poinar identifed accordion-like regions where crevasses open up, as well as regions without crevasses.  Much as the Princess would expect, the data show that thicker ice is much less likely to experience crevassing: at elevations where supraglacial lakes regularly form hydrofractures (~1100 meters elevation), the ice sheet is about twice as likely to host cracks than at higher elevations where the lakes freeze rather than fracture (~1600 meters).  The trend continues to yet higher elevations: at ~2000 meters elevation, the ice sheet hosts only a small fraction of the crevasses that are observed at the lower-elevation fracking sites (4%).  Without a crack, the ice can’t frack.

In short, warming temperatures are creating supraglacial lakes farther inland, at higher elevations atop thicker ice that may overly a dry bed.  However, these lakes are unlikely to incite hydrofracture, keeping the water in them away from the dry bed below.  Thus, the dry waterslide underneath much of the Greenland Ice Sheet should remain dry.

Though this new research shows that supraglacial lakes are unlikely to bring water to frozen beds, this does not mean that the Greenland Ice Sheet is “safe” from climate change: other mechanisms may, or will, cause the ice sheet to disappear.  For instance, warmer ocean waters appear to be making contact with the edges of the ice sheet; many fast-moving glaciers have recently started to flow yet faster; and melt rates everywhere on the ice sheet have increased over the past few decades.  These processes will prove to be more important than ice sheet fracking in the demise of the Greenland Ice Sheet.  The consequent sea-level rise will affect us all.