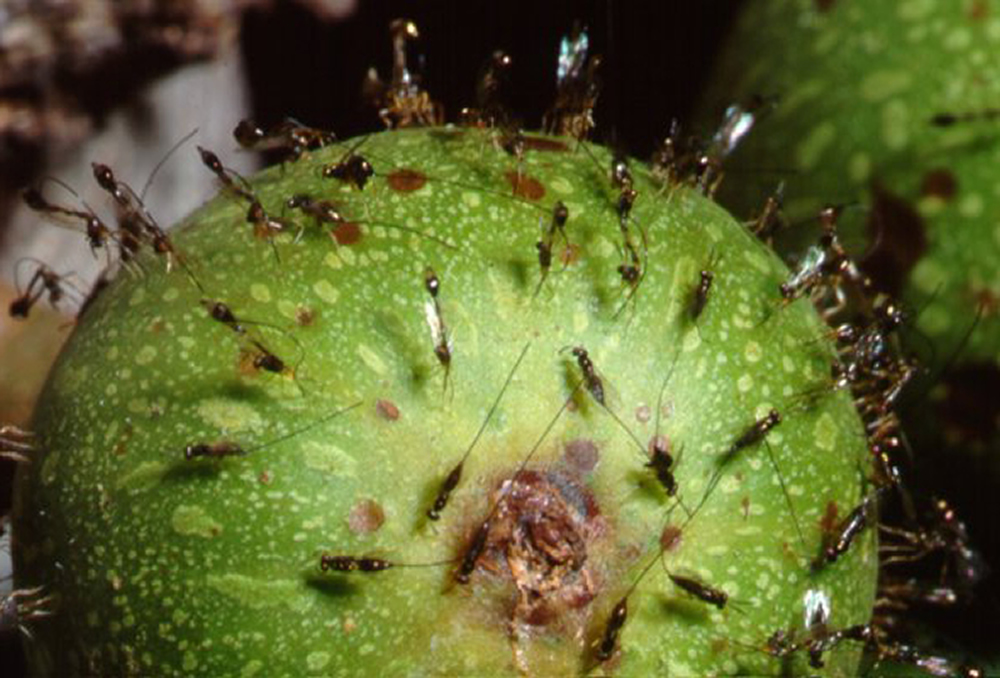 Female insects have one goal in life: to find the best place to lay their eggs. For fig wasps, that is the developing fruit of the luscious fig plant. However, when one particular parasitic fig wasp (Apocryta westwoodi grandi) descends onto a recently fertilised fruit, she has to bore her way through the tough unripe fig to find the larvae of other insects that are already developing within, which she will then parasitize to give her own eggs the best start. Fortunately, the insect’s immensely long (7–8mm) and slender (~15 μm) ovipositor – which injects eggs into the fig – is equipped with a sharp tip, ready to bore through the woody fruit. However, Namrata Gundiah from the Indian Institute of Science, Bangalore, was intrigued by the differences between the egg delivery systems of the boring parasitoid wasps and the wasps that pollinate the fig’s flowers. ‘Our first question was what are the different adaptations that these two species undergo?’ says Gundiah. She publishes her discovery that the tiny fig wasps are equipped with a zinc tipped drill bit for boring in The Journal of Experimental Biology at http://jeb.biologists.com.

Teaming up with graduate student Laksminath Kundanati, Gundiah used scanning electron microscopy to take a high resolution look at the tips of the insects’ ovipositors and was amazed to see that the end of the boring wasp’s ovipositor looked like a drill bit, complete with teeth to bore through the woody fruit. In contrast, the tip of the pollinator wasp’s ovipositor closely resembled a spoon-like structure. And, when they looked along the length of the borer’s ovipositor, Kundanati and Gundiah noticed tiny pits in the shaft, roughly in the location where the structure bends as the female drives the tip into the fruit to allow the ovipositor to flex without breaking. They could also clearly see sensory structures at the tip that could help guide the ovipositor to the best locations for the wasp to lay her eggs.

Next, the duo investigated the material from which the drill bit was made. ‘We asked what could enhance the hardness of the structures’, recalls Gundiah. Focusing a beam of electrons on the minute tip, Kundanati and Gundiah recorded the X-ray spectra emitted by the material and discovered that the tooth structures were enriched with zinc. ‘Zinc mainly increases the hardness, which will affect the wear resistance of the drill bits’, explains Gundiah.

Kundanati and Gundiah then prodded the minute drill bit with an atomic force microscope (AFM) probe to indent it to measure how hard the zinc-enriched teeth were. Gundiah admits that pinpointing the tiny teeth on the miniscule curved structure was particularly challenging: ‘Usually, AFM is done on relatively large surfaces and so it doesn’t matter where you go and indent the material’, chuckles Gundiah. But eventually the duo recorded the hardness of the teeth at 0.5 GPa: ‘That is almost as hard as the acrylic cement used for dental implants’, says Gundiah.

Finally, knowing that the females impale unripe figs with their ovipositors many times during the course of their lives, Gundiah decided to measure the buckling forces exerted on the slender structure as the female drives the ovipositor in. Kundanati filmed the tiny wasps on fig trees around the institute campus by attaching a microscope objective to a video camera. He clearly saw the slender structures bend and flex as the insect drove it in and calculated that the 15 μm diameter structure can tolerate buckling forces of almost 7 μN.

Having characterised the fig wasp’s drill bit, Gundiah is keen to design a minute boring tool based on the lessons that she has learned from the insects.