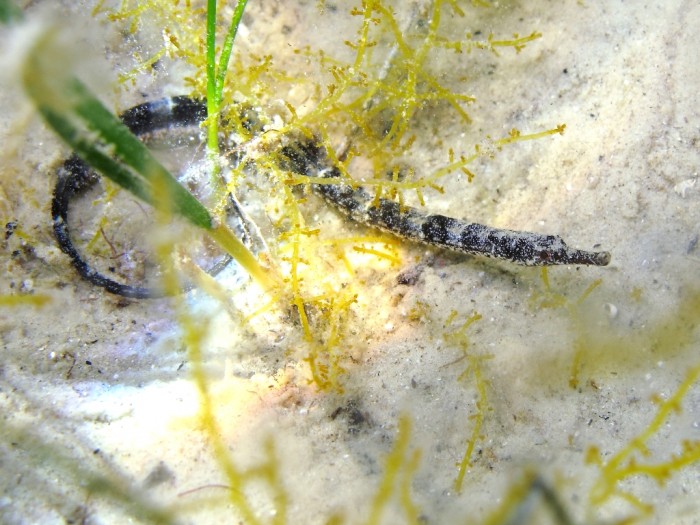 Mitochondrial DNA studies shows the occurrence of three well-defined groups of pipefish populations – which independently evolved in a Pleistocene scenario – for Syngnathus abaster in the western Mediterranean and Adriatic Seas.

We marvel at the diversity of morphological variability in the pipefish Syngnathus abaster found in the Mediterranean basin. This little and peculiar fish lives in marine coastal, brackish, or freshwater habitats. The unusual parental care, carried out by the male alone, is evidence of its relationship to seahorses. The Mediterranean pipefish is characterized by a short life cycle during which its poor swimming ability strongly limits its potential for dispersal. The spread across the Mediterranean with respect to a variety of morphological forms of S. abaster led some authors to propose multiple sub-species. However,  even though habitat fragmentation, along with unpredictable changes in ecological parameters of brackish waters, play an important role in the possible occurrence of a complex of different species for S. abaster, we lack genetic support to shed new light on the actual number of species. With our work, we finally reveal  different genetic populations of S. abaster  occurs in the western Mediterranean and the Adriatic Sea, thus revealing the secret we found inside its mitochondrial DNA.

This molecule, which is exclusively inherited by the mother, evolves faster than nuclear DNA, making it appropriate for intraspecific phylogeny and phylogeography analyses. We found that a high genetic structuring occurs in the western Mediterranean and Adriatic Sea resulting in three well-defined groups of populations: this fact is indicative of three distinct species, likely exclusive of the westernmost areas of the basin, the northern Africa coasts, and the Italian mainland coastlines, respectively. Molecular data suggest that the fluctuations of sea level during the Pleistocene glaciations, and the consequent  geographic isolation of the areas we analyzed, played a pivotal role in the colonization of the Mediterranean by this fish.

Results also evidenced a high level of variability within the groups of populations potentially involved with a linear stepping-stone model of dispersal at short distances along the coasts, which was never described for this species. In conclusion, this study confirms the power in depicting new species and describing their evolutionary history of the mitochondrial DNA that, even being just an infinitesimal part of the whole genome of an individual, represents an amazing tool to go back in time and reveal the secrets of a species. Or should I say the secrets of a species complex in the case of S. abaster?

Bulking Up: Increasing Muscle Mass in Fish with Gene Editing Researchers increase the amount of edible flesh in red sea bream by editing the gene for a hormone that restricts muscle growth