Our Sun is the nearest star to us. We have worshipped it, bathed in its light, and, of course, studied it. Scientists regularly use our Sun as a model for how similar stars should work. Thus, scientists develop the theory of stellar evolution (the study of the life cycles of stars) by observing our sun. Curiously, despite the Sun being the most studied of all the stars, scientists have discovered a discrepancy in their models which brings to light some mysteries about how the Sun actually works! 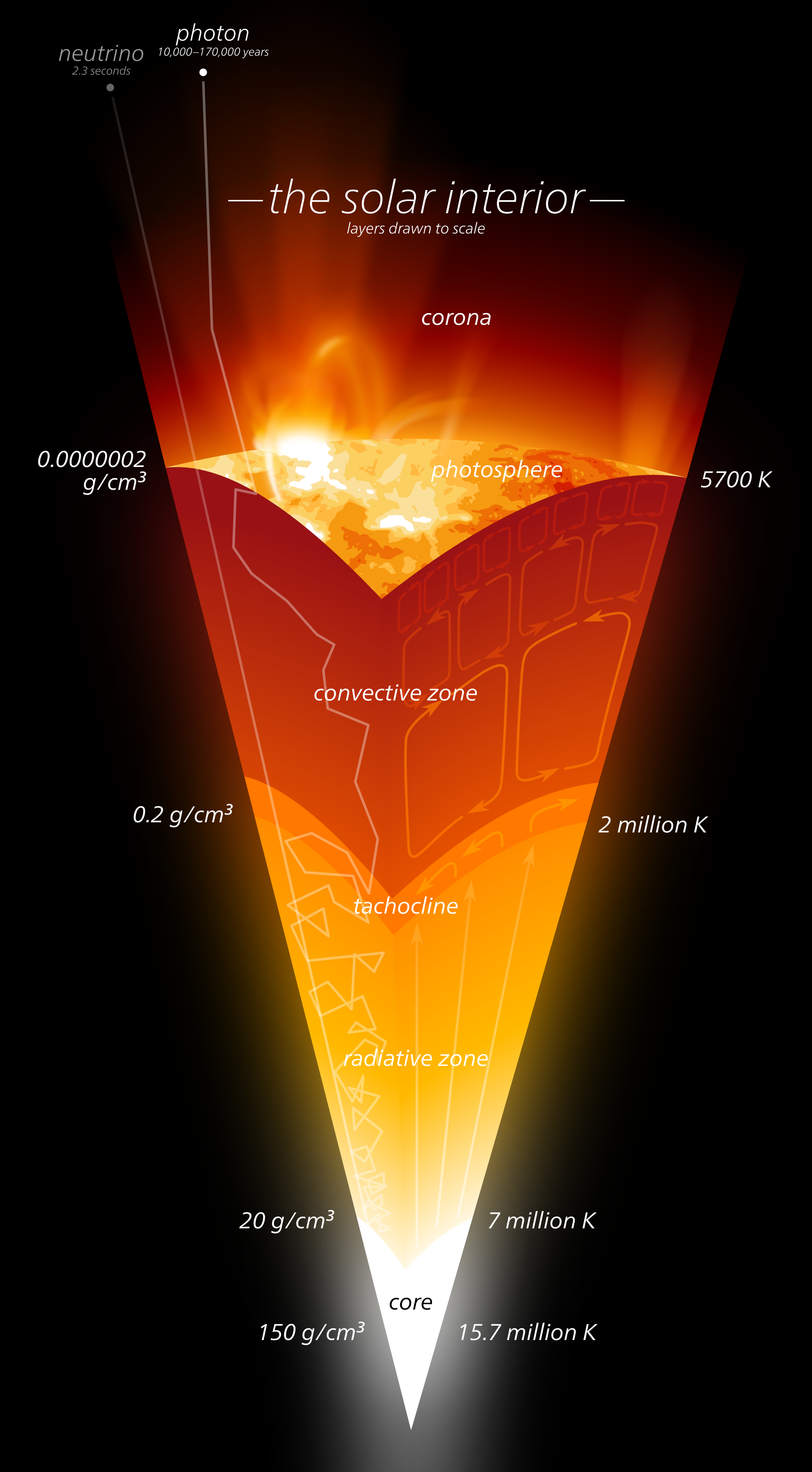 The layers of the sun

The Sun’s interior has 3 major layers, like an onion. These 3 layers are distinguished by temperature and physics that occurs in each layer. The 3 layers are the core, the radiative zone, and the convection zone. The core is millions of degrees, and this layer is where all nuclear fusion of hydrogen occurs.  The radiative zone makes up the majority of the Sun, and this is where all photons get absorbed and reabsorbed. The convection zone is the outermost layer of the interior sun, and is mostly plasma convection; plasma convention is the pattern of stirring and swirling of gases and plasmas to move heat and material.

As stated previously, scientists use the Sun to model other stars. The Standard Solar Model is what scientists are using and developing to explain and understand the physics of the Sun. The Standard Solar Model includes many dimensions of the Sun’s behavior such as energy transport, energy exchange, chemical compositions, temperature gradients, and of course many more. However, there exists a major problem with this Standard Solar Model… its prediction of the chemical makeup of the Sun doesn’t match our observations! The field of helioseismology actually sends probes that use acoustic waves to measure the internal structure of the Sun, including its chemical make-up.

This discrepancy is a big deal. The chemicals that a star is made of strongly determine its path in its life. It determines the colors of the star, how big it will grow, how long it will live, and what sort of death it will bear.

Hope is not lost. The authors of this paper have found a simple modification to the Standard Solar Model which resolves this discrepancy. These scientists used the Z-machine, the world’s most powerful radiative source located at Sandia National Labs, to simulate the Sun’s interior. Using the Z-machine, these scientists measured the different chemical compounds at conditions mimicking the boundary of the Sun’s radiative and convection zones. The scientists took these data and compared them to the Standard Solar Model to find a surprising result. They found the iron levels in the Z-machine were higher than the predicted model for the Sun.

Iron levels in the Sun contribute to opacity, which is how much of the light produced by the Sun gets reabsorbed into the Sun instead of being radiated out. If the iron content of the Sun is much higher than previously thought, then there is actually more light and energy that the Sun is producing than we can see from the outside. Even better, when compensating for the higher opacity in the Standard Solar Model, many other discrepancies are also remedied, such as improvements to the energy transport through the Sun’s interior layers. The Standard Solar Model is used to study many stars in the sky, but it still has some missing ingredients, so this find will improve the understanding for many scientists studying stellar evolution.

Our daily lives are oriented around the Sun; it is such an integral part of humanity, except winter go-ers in Antarctica. It’s exciting that the Sun provides such in-depth scientific knowledge to our communities. Nonetheless, this scientific contribution gets us one nudge closer to better understanding the billions and billions of stars that light our night sky.

How stars can limit life in the universe For the past few decades, scientists have been looking at planets outside of our solar system to see if they could host life. Now, scientists have discovered another factor for habitability: radiation from the planet’s central star.

Why is the Sun Yellow? Red dwarf stars are much more common, so are we a fluke?

The Deafening Sound of Neutron Stars Crashing Together When large objects in space orbit around each other, they make big waves, and a big sound.

Stray stars between galaxies add to the cosmic light in the universe Astronomers at Caltech and their colleagues have detected a diffuse cosmic glow that appears to represent more light than that produced by known galaxies in the universe.