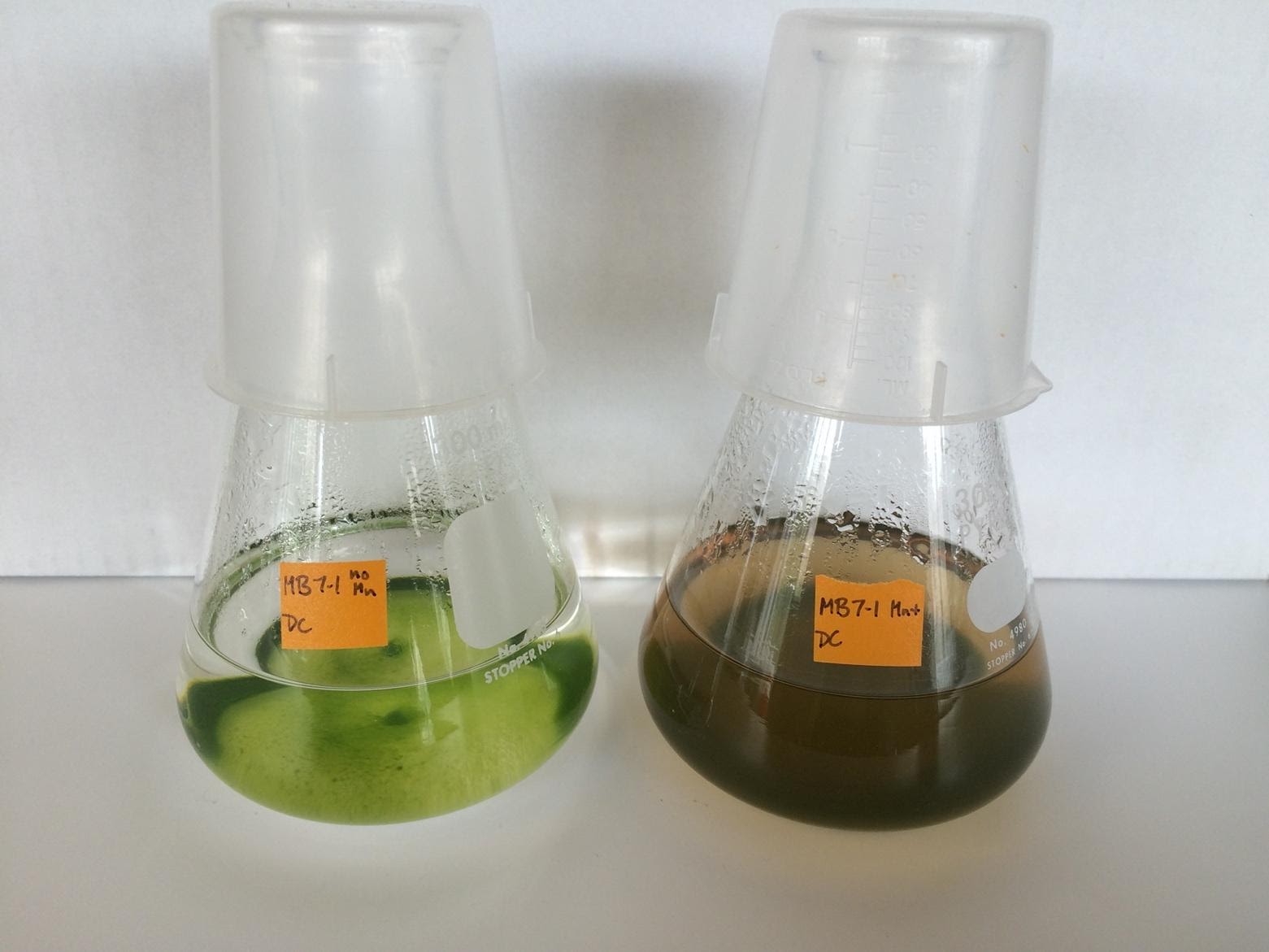 Manganese (Mn) is a common element widely distributed on Earth, and manganese oxide minerals are important for the movement of carbon, nutrients, and other metals in the environment. While Mn is beneficial in many instances, unfortunately, it can also be a pollutant in certain areas like aquatic ecosystems, if concentrations become too high. For example, in areas where coal has been mined, waters draining from these locations can be heavily polluted by manganese and other metals. One way to remove manganese from water is to make Mn oxide minerals, because they are solid and not easily consumed by organisms in aquatic environments. These minerals can then be collected and removed from the water. The good news is, tiny single-celled creatures may be able to help make these Mn oxides.

From a location in western Pennsylvania that has been polluted with manganese from coal mining, researchers from the University of Exeter (UK), and the Smithsonian Institution, University of Minnesota, and Woods Hole Oceanographic Institution (USA) grew and isolated 98 organisms. They wanted to identify if there were any photosynthetic organisms (those that can harness sunlight to create their own energy) such as algae, cyanobacteria, or diatoms that could live and withstand the high Mn levels (10 mM). If the organisms grew, the researchers then wanted to know if these organisms were capable of making manganese oxide minerals from Mn dissolved in water. If the organisms could make these Mn oxide minerals, they could be helpful in cleaning up Mn polluted areas.

When grown with dissolved manganese for some time, all organisms turned a brown-black color, which indicated Mn oxide mineral formation. To confirm the presence of manganese oxides, the researchers used a stain that turns bright blue upon exposure to them. 18 of these organisms consistently produced Mn oxide minerals and were used to help the researchers study the process of Mn oxide mineral formation. Manganese is an essential element to part of the photosynthesis process, so it makes sense that these organisms should require some Mn.

The researchers wanted to figure out how exactly their green algae, cyanobacteria, and diatoms made manganese oxide minerals. Understanding how the minerals are made  is important for developing an efficient strategy for cleaning up manganese-polluted waters. Before this study, scientists assumed that these organisms indirectly make manganese oxide minerals as a byproduct from photosynthesis. Since some bacteria and fungi can make these minerals using proteins and a compound called superoxide, the researchers thought their new organisms might also do this.

In a test, they grew each of the green organisms with manganese, and then added one of two compounds called protease and superoxide dismutase. If either of these additions interacted with proteins or superoxide around the organisms, it would stop the production of brown manganese oxide minerals. The researchers would then know that proteins or superoxide were important for mineral formation. It turns out, both compounds stopped Mn oxide minerals from being made. This means that there are a few different ways these minerals might be made by the organisms.

By studying which organisms can make manganese minerals, and identifying how these minerals are made, scientists can better understand the role of Mn in the environment. In areas like Appalachia (United States), coal mining has been a major industry for centuries and many abandoned mines drain waters polluted with manganese and other metals. Scientists and engineers can use this new information to inform and design more efficient strategies for cleaning up areas impacted by human activity.