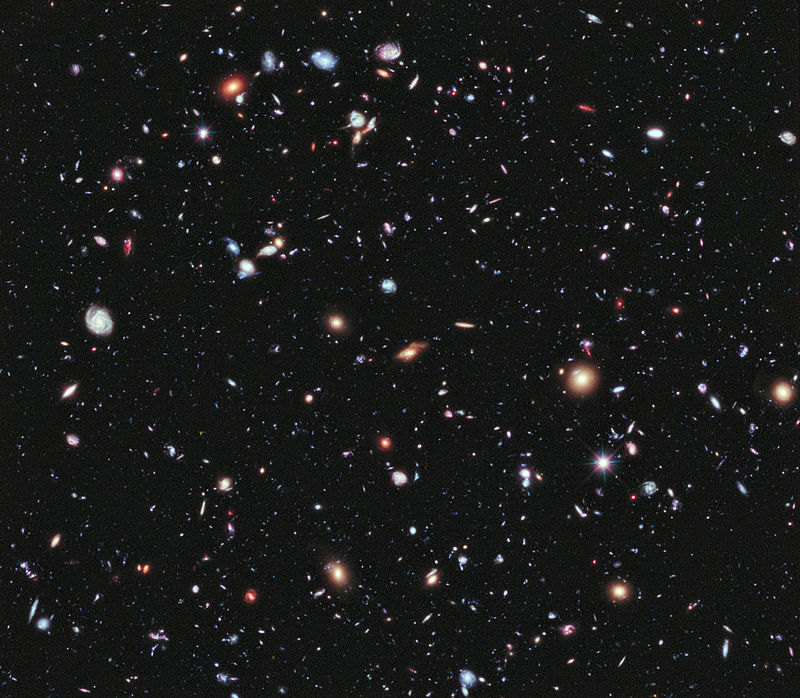 Baryon acoustic oscillations, an artifact remaining from the Big Bang, can be used by scientists to measure cosmological distances regardless of how the distances are changing. Soon after the Big Bang, the beginning of our universe, all of the matter of the universe was packed densely into a much smaller space. The result was a plasma of electrons, protons, and other particles so dense that light could hardly escape it. The dense plasma is called the primordial plasma.

The density of the primordial plasma combined with the forces of gravity around the concentrated mass in the plasma caused waves. These waves of gravity and pressure in the plasma are referred to as cosmic sound. Cosmic sound rumbled through the early universe primordial plasma with surprising speed, often close to half the speed of light. As the universe expanded, the different constituents of the primordial plasma were affected differently by the cosmic sound depending on their make-up. This is similar to how sound travels faster underwater than it does in the air, because the water and the air are made of different materials.

The result of the cosmic sound rippling through the ever-expanding primordial plasma created pockets which gathered the baryonic matter, like protons and neutrons, into higher densities. The areas where baryonic matter is most dense create a pattern of peaks throughout the plasma. These patterns are referred to as baryon acoustic oscillations.

Baryon acoustic oscillations resulted in dense concentrations of protons and neutrons in certain places in the primordial plasma. As the universe continued to expand, these protons and neutrons were attracted, causing hydrogen to form. The primordial plasma became less dense and then the spurious hydrogen became hydrogen dust. As these clumps of hydrogen were formed, the clumps were gravitationally attracted and collapsed, resulting in the first stars. These stars then collected into clusters, resulting in the first galaxies.

The finding in this paper not only demonstrates the baryon acoustic oscillation theory can be observed in the universe, but also proposes the use of baryon acoustic oscillations as a sort of cosmic ruler. Due to light travelling at a finite speed, the light from a star takes time to get to Earth. The light from the star is actual the picture of how the star was long ago. For example, if a spaceship is 75 light years away from Earth, they would see the Earth as it was 75 years ago. The starlight in the night sky is actually all of varying ages. Plus, the universe is ever expanding. As a result, the distances and locations of galaxies are difficult to measure, since the space between the galaxies keeps increasing. Two galaxies today that are 75 million light years apart, even if the galaxies were completely stationary, in the future will be 100 million light years apart. This added distance is not because the galaxies are moving, but because the universe is expanding.

Cosmologists, scientists studying the evolution of the universe, need a way to refer to the distribution of the galaxies and galaxy clusters without having to know how old the light from a galaxy is, or how quickly it’s accelerating away from its neighbors. The pattern of the baryon acoustic oscillation is perfect, since it has not changed since the early universe. Baryon acoustic oscillations provide a great tool for cosmologists to measure distances in the universe without having to worry about when the measurement was taken.