Engineered living materials are composed of both synthetic materials and living cells. They are made in a lab to do things, like respond to their environment, which goes beyond typical materials like inert plastics used to make so many of our products. What scientists want the material to do determines how it is produced.

Synthetic biologists, biologists who try to simulate life in the lab, have for a long time been engineering bacteria such as E. coli to produce organic materials of all kinds such as medicines, polymers, or starches. The idea was innovative, but many past experiments failed to produce high yields. Yield is important — companies want to produce engineered living materials at scale, and with minimum equipment and a low environmental impact.

Bacterial cellulose is a starchy organic compound that is made by certain species of bacteria. Bacterial cellulose can be altered by using engineering techniques to produce substances that can help degrade toxins such as antibiotics or hormones present in wastewater streams. Bacterial cellulose can also be produced at a low cost and is capable of being decomposed by bacteria and other organisms. Synthetic biologists have successfully engineered yeast and bacteria to make cellulose-based materials such as plastic, which has been used for biodegradable product packaging.

Similarly to how plant leaves build materials from tissues to achieve functions essential for their survival, synthetic biologists at MIT and Imperial College London wanted to develop a material that was like complex living tissue. However, instead of plants, they modeled their experiments after the process for making a drink called kombucha. Kombucha is a fermented drink that produces a symbiotic culture of bacteria and yeast, or “SCOBY.” The SCOBY on kombucha is a thick mass at the surface called a “pellicle” which is made of bacteria, yeast, and cellulose. 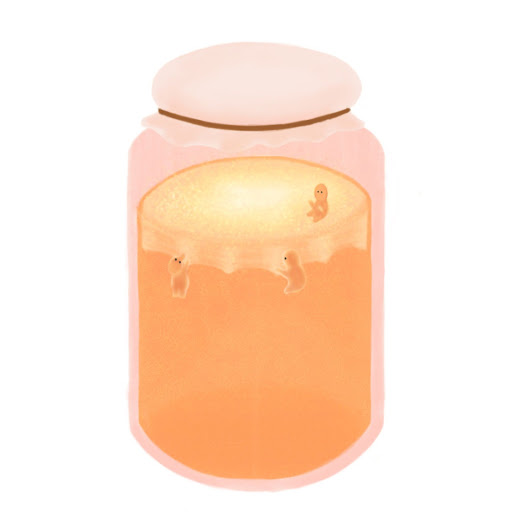 This is a general diagram of how the kombucha technique works. The mass at the top is the pellicle, containing yeast, bacteria, and cellulose. Their liquid food supply is at the bottom. (Cartoon microbes not anatomically correct.) Image copyright Daisy Cifuentes & Sciworthy

However, this co-culture is not a typical SCOBY that you’d find in a beverage. In the experiment, the scientists genetically manipulated the yeast in a SCOBY to make a synthetic SCOBY, or “Syn-SCOBY” for short.  In a series of experiments, they got the Syn-SCOBY to sense light or chemicals in a solution. The Syn-SCOBY contained two special microbes –  a lab strain of yeast, S. cerevisiae, and cellulose-producing bacterium called Komagataeibacter rhaeticus.

The researchers inserted genes into the yeast so they could perform tasks such as sensing chemicals or secreting enzymes, while Komagataeibacter rhaeticus bacteria produced the bacterial cellulose. The researchers had to figure out the right conditions that make both the yeast and bacteria happy, such as the correct amount of sugar to add. They tested the co-culture of the yeast and bacteria in multiple media recipes to determine which one produced the best pellicle.

The Syn-SCOBY produced a healthy pellicle and a thick layer of bacterial cellulose in three to four days.  After successfully growing the pellicle, they tested to make sure it could be dehydrated and then rehydrated, which is an important characteristic for its use in industry since the material may need to be stored for long periods of time. They did find that the bacteria/yeast/cellulose material they made retained its function even after drying and rehydration.

In their earlier experiments, some of the S. cerevisiae yeast cells did not incorporate well into the pellicle and were found at the bottom of the liquid. This is not optimal since the scientists need to make sure the yeast cells stay in the pellicle in high concentrations, to perform the tasks instructed by the genetic programs assigned to them. To solve this problem, scientists grew the yeast in a more dense nutrient broth, forcing it to incorporate into the pellicle at the surface.

Once they achieved the desired result, scientists proceeded to make Syn-SCOBY materials that are engineered to respond to chemical and physical stimuli. For example, they instructed S. cerevisiae yeast to sense light by adding a gene to the yeast for a protein that changes shape when exposed to light. They also made a version of the material that could detect a hormone called B-estradiol, a form of estrogen. To do this, they inserted a gene into the yeast that produces a green fluorescent glowing protein when the estrogen comes into contact with the yeast. Chemical sensing materials may be useful for detecting contaminants in water.

Furthermore, they developed a contaminant-sensing Syn-SCOBY that allowed the yeast to detect other toxins present in the environment and secrete enzymes that helped remove them. Scientists engineered the yeast to secrete an enzyme called laccase to degrade the B-estradiol. These results show that the yeast cells are capable of responding to stimuli.

Syn-SCOBY represents one of the first batch-produced synthetic living materials with functions beyond structure for research, product manufacturing, and environmental remediation.

New lab technique improves how we study the microbiome Scientists started out wanting to study how Vitamin A affects our gut flora. They ended up coming up with a new way to count bacteria by encasing them in tiny droplets and tagging each one with DNA “barcodes”, detecting more detail than older techniques could.

Bread yeast can help humans explore space! Studying the effects of radiation on yeast cells can help us understand how astronauts’ bodies may be affected during long term space travel. This paper describes an experiment that will be conducted on board the satellite BioSentinel.

Cheese, wine, and …. fungi? Fungi play a major role in the making of some of our favorite foods, like cheese and wine. Even though yeast, the fungi behind the fun, is commonplace in the environment, we don't actually know everything about it.

The study was done at: Imperial College London (UK) and Massachusetts Institute of Technology (USA)