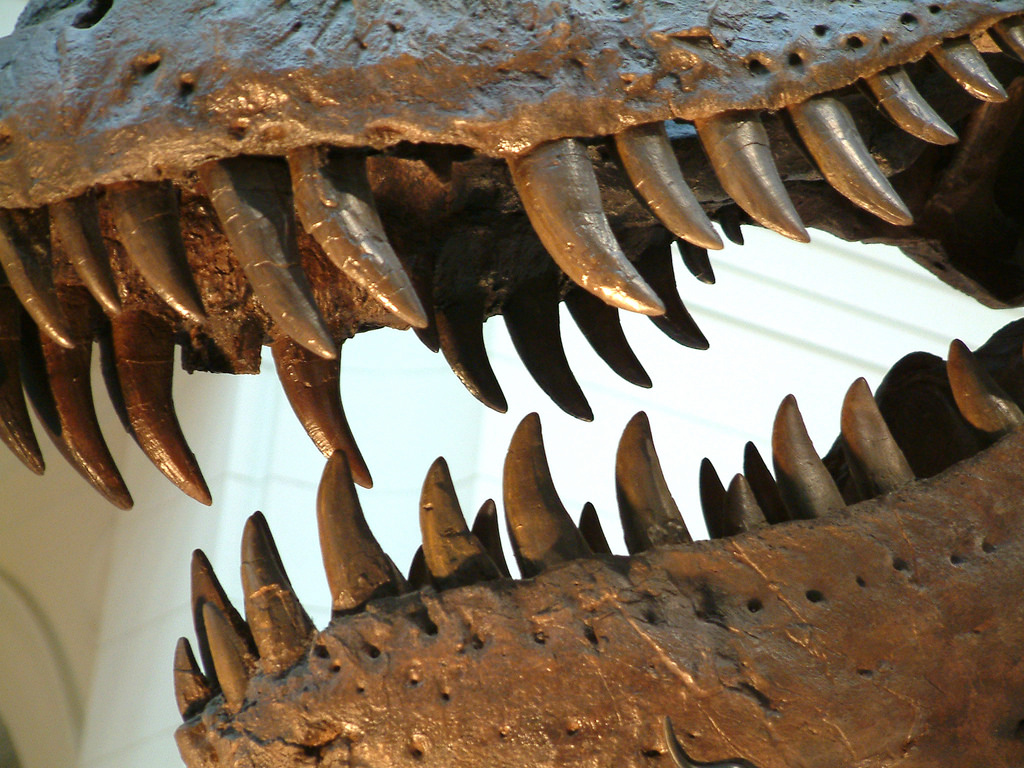 Tyrannosaurus rex needs no introduction. It is the go-to dinosaur for all ages that has been popular since its description in 1905. Partly due to its popularity, scientists have researched and debated much of its life history. One of the more popular debates is centered around what T. rex ate and whether it was a carnivore or a scavenger. While there are many different ideas surrounding what the dinosaur may or may not have eaten, one comparison had not been drawn between Tyrannosaurus and some modern animals – were bones a part of its diet on purpose? In order to answer this question, its jaw and skull anatomy had to be biomechanically modeled to observe how well its musculature, bite force, and tooth structure would have withstood biting down on bone.

Modern reptiles will swallow bones whole rather than break them; crushing bones for food is generally thought of as a mammalian trait since most modern reptiles do not have the jaw strength to crush larger bones. However, T. rex was likely able to crush the bones of its prey. To understand this difference, a recent paper revisited how hard Tyrannosaurus rex could bite and how that force influenced its dietary habits. Using jaw muscle modeling, bite force estimation, and tooth resistance to pressures, the researchers attempted to understand how it was possible that T. rex was able to finely crush bones as it ate.

According to the authors of the paper, large-bodied tyrannosaurids were able to crush bone thanks to their enormous bite forces which, in the case of Tyrannosaurus, were calculated to be between 8,526 to 34,522 newtons of force based on its skull and jaw dimensions. To put this into perspective, some crocodilians can bite down with approximately 16,500 newtons of force and we humans can only bite down with a measly 890 newtons. Similarly, the teeth were able to withstand the stresses of repeatedly biting hard bone at high pressures. Most of the maxillary teeth could withstand stresses that fracture the dense outer layer of bones for up to 25 mm from the tip of the tooth. Once the tooth had punctured a bone, the bite force would have easily crushed the remaining part of the bone.

Osteophagy, the tendency of an animal to knowingly ingest bones as part of its normal diet, is one method animals use to gain the nutrients they need and is fairly common throughout all animals. Modern reptiles and birds that break bones for consumption use a variety of methods to access the nutrition locked away in the bones themselves. For example, alligators will use their blunt teeth to bite and puncture other animals (bones included) and the bearded vulture will drop bones from great heights to break them and access the marrow inside. Both birds and reptiles that utilize osteophagy regularly have strong stomach acids with a very low pH – thus allowing for the bones they eat to be easily  chemically dissolved. Similarly, tyrannosaurids such as Tyrannosaurus would have been able to break down bone and easily digest them to allow extra nutritional intake. In the case of T. rex, the teeth and jaws were perfect to crack and fragment bones and, based on bone fragments in collected coprolites (fossilized poop that has been associated with T. rex), easily digest them as well.

Scientists have known for a long time that the bite force of Tyrannosaurus was immense and played a part in its ability to eat. However, the extent of T. rex’s bite force as a function of diet had not been explored. The combination of bite force, the teeth’s ability to withstand massive forces, and repeated biting in the same area along a bone gave Tyrannosaurus the ability to fragment bone with relative ease. Adaptations to freeing more nutrients from bones would have helped sustain its enormous body size and helped it to be as evolutionarily successful as it was.

Original study: The Biomechanics Behind Extreme Osteophagy in Tyrannosaurus rex