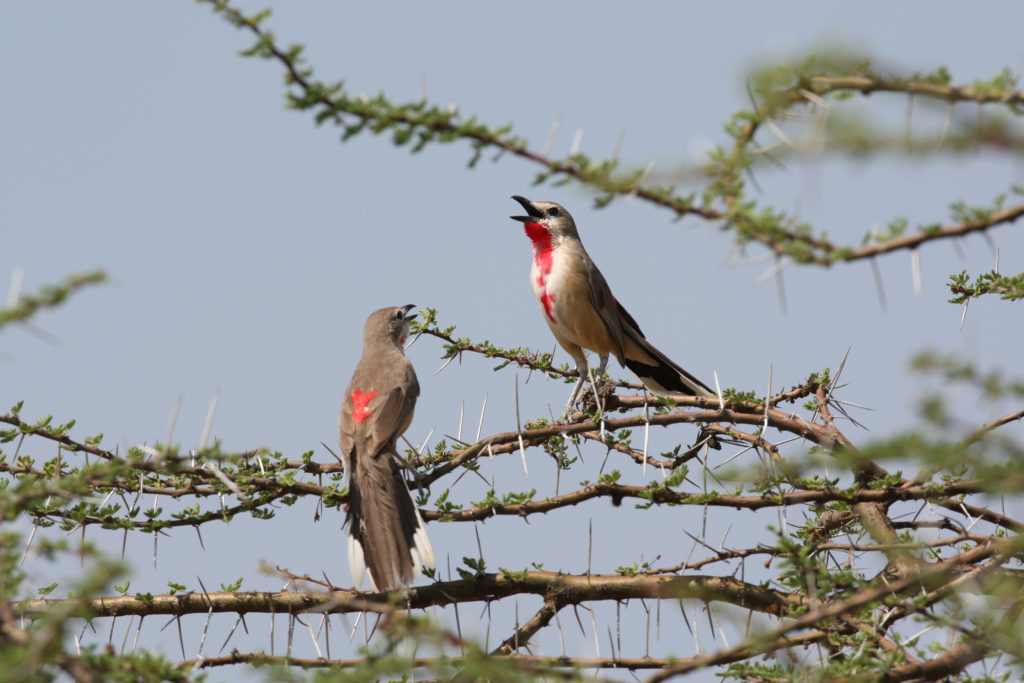 In “Ain’t no Mountain High Enough,” Marvin Gaye and Tammi Terrell sing “If you ever need a helping hand, I’ll be there on the double, just as fast as I can”, and later, “all winter’s cold can’t stop me, baby.” It’s a beautiful duet. On top of the greatest rhythm section in American music, the two proclaim that nothing could ever get in the way of their devotion to each other.

The message is pretty similar when two mated birds duet.  That’s right, mated birds of hundreds of different species sing duets.  Nobody knows how many species duet, but it’s clear that most of them live in the tropics. It’s also clear that in most duetting species, the duets mean something like, “If you ever need a helping hand, I’ll be there on the double, to cooperatively defend our shared territory from intruders.”  My latest paper, however, suggests that the birds’ devotion to one another might not be as unshakeable as Marvin and Tammi’s.

In that report, Michelle Hall and I show that when duetting and migration evolve together in the same species of songbird, that species quickly loses either duetting or migration. Duetting and migrating together is an evolutionarily unstable state. As a consequence, almost none of the species that migrate also sing duets. Our data can’t tell us why this is the case, but we have a guess. In species that migrate, most pairs only stay together for one breeding season, but in non-migratory species pair-bonds can last for many years. Evolutionary theory suggests that long-lasting relationships favor the evolution of cooperative behaviors like duetting.  So we think that duetting evolves as a kind of cooperative act, and pair mates evolve cooperate acts when they stay together longer, and they stay together longer when they don’t have to migrate.

Connecting the evolution of behavior to variation in the environment is an important goal of behavioral biology.  Our study does that by showing that duetting can only persist when the environment is stable enough that birds do not have to migrate. This is probably the reason why there are so many duetting birds in the tropics – there is no winter, so birds can live there all year long.  So as it turns out, winter’s cold can’t stop Tammi Terrell from making beautiful music with Marvin Gaye, but it’s a deal breaker for duetting songbirds.

Edited By: Sciworthy Staff
Source: Migration and the evolution of duetting in songbirds
Publication Date: 11 March 2014