The settling of distant planets and solar systems has started to be more than just a dream of the scientific community.  When considering projects that span across millennia, incentives for space exploration that forego short term benefits in the interest of long term results may be the most successful approach.

In the field of exploration, space remains by far the costliest in both time and money.  Given the recent expansion in space exploration to include private companies and the increased interest in manned missions to mars and the moon, humanity may well become a “multiplanetary species” in the future. When realizing these distant goals such as space settlements and space colonization, it is important to consider that the settling of space might only be possible across generations. In Jacob Haqq-Misra’s paper, “Can Deep Altruism Sustain Space Settlement,” Haqq-Misra delves into this topic and explores strategies that can be pursued in order to make possible a multigenerational approach to space settlement. 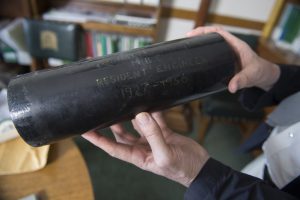 Humans love to put time capsules in places for other humans to find. This one was found in Elizabeth Tower (aka Big Ben).

Haqq-Misra goes on to break down long term human projects into a hierarchical relationship between information, structure and culture. Cultural projects typically involve the “preservation of tradition” and culture of a society, structural projects are done to preserve buildings and engineering accomplishments, and information projects archive knowledge such as solutions to problems.

He then describes and compares generational versus intergenerational time scales, introducing the concept of deep time. Generational time typically involves a project that is started and completed within one generation. The founder of the project sees it come to fruition and reaps the benefits, such as the Human Genome Project. Intergenerational time involves projects that run between 100 and 1000 years. With intergenerational time, the founder of the project may not live to see the benefits, but their descendants usually will see the benefits. These projects usually have an impact on the same culture that was around when the project started.  Deep time involves projects that take over 1000 years to complete. Examples would be Stonehenge or the Great Wall of China. These projects are far less common and are rarely pursued, as the undertaking of such projects can require massive investment at start.  Also, with deep time, founders and their descendants will not see any benefits from the end results of the project.  For this reason, projects that extend into deep time tend to be altruistic in nature – we do it for some greater good.

In evaluating whether or not humanity is ready to set out on the long journey of settling space, Haqq-Misra first analyzed the incentive structure of the world.  With its current predominantly capitalistic societies, Haqq-Misra acknowledged that one potential option to finance humans settling space would be deep egoism.  Deep egoism is a system where space ventures could turn massive profits and thus finance future expeditions and settling.  However, deep egoism poses a risk of failure if financial ventures fail to “continually provide a return on investment.”  So, deep altruism is the most viable option to guarantee the success of long-term missions.  Deep altruism, however, can only be achieved through government and private enterprise intervention, and although deep egoism can certainly assist in the process, it will be deep altruism that will allow for long term settlements in space.

What is direct heating and how does it impact our future? With some simple calculations, two scientists estimate that Earth will be unlivable by 2370 due to direct heating, which, despite how it sounds, is not related to climate change.

Do humans need to be altruistic to make it to Mars? Altruism is selfless action for the well-being of others. Philosophical ideas suggest that the vision of space settlement can be achieved by coordinated altruism over a long time.

The study was funded by: This work was not funded.