Image Credit: "The Anatomy of the Bonobo" by Hannah Newey is licensed under CC BY-NC-SA 4.0
By Eve K. Boyle

For centuries, one focus of anatomists has been to determine the ways in which muscles differ between individuals. Due to hundreds of years of dissections and comparisons, we know that almost every muscle in the human body varies slightly from person to person. Some muscles can vary in the bones they originate from and the bones they attach to, others can have extra muscle fibers or fuse with the fibers of nearby muscles, and some can even be entirely absent. Most variations from the “typical” muscle presentation in the normal human population occur without pain or other symptoms.

Some muscles in humans are generally considered to have been “lost” in our ancestors during human evolution. They are rare in adult humans but appear frequently in adult apes, our closest living relatives. Humans with various genetic disorders and syndromes may demonstrate these “ancient” muscles. We collected as much information as possible from previous studies about fourteen muscles that are common in apes and other primates, but only appear in adult humans as variations. We wanted to better understand how often these muscles appear in humans and review what we know about how these muscles develop in human embryos.

Improving our understanding of how “ancient” muscles develop and appear in humans will help us better understand the genetic and developmental processes that make humans appear differently from apes, despite us sharing so much of our DNA. Furthermore, compiling known information on how these muscles develop in human embryos will allow researchers to better understand how genetic disorders affect the growing embryo and may point to possible solutions for prevention and treatment.

The apes—gibbons, orangutans, gorillas, bonobos, and common chimpanzees—have many muscles that do not normally appear in adult humans. Previous research has demonstrated that many of these muscles do actually appear during the development of normal human embryos, but they usually disappear before birth as they blend with other muscles to form the muscles that are typically present in most adult humans. 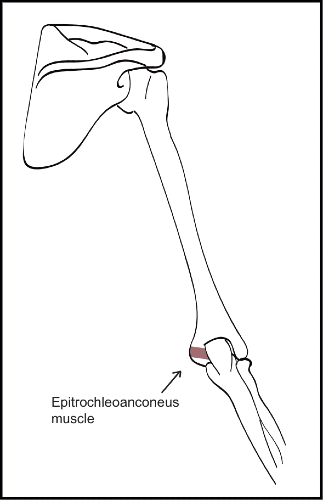 For example, the epitrochleoanconeus is a small muscle on the back part of the elbow joint (See picture). It extends from the inner end (medial epicondyle) of the upper arm bone (humerus) to the bony protuberance (olecranon process) on the forearm bone (ulna). It is present in most adult primates, including common chimpanzees and bonobos, which are two species that share nearly 99% of their DNA with humans. Research has shown that the epitrochleoanconeus is also present in human embryos as a distinct muscle in the ninth week of development but typically disappears after about ten weeks.

When this muscle does not disappear before birth, it appears in normal adult humans as a variation or in humans with genetic disorders as an anomaly. Our review of previous anatomy research found that the epitrochleoanconeus is most likely present in about 20% of normal adult humans as a variation and in about 7% of infants with Edward’s syndrome (Trisomy 18). Since the prevalence of the epitrochleoanconeus in normal humans seems to be so high—present in about 1 in 5 individuals—it is possible that this muscle isn’t a rare variation at all. Instead, we believe that the presence or absence of this muscle are both common presentations. This would make epitrochleoanconeus similar to traits like eye color, which has multiple common presentations in humans.

The presence of muscles like the epitrochleoanconeus in one person does not mean that they are less evolved or more evolved than other people. Since the formation of these “ancient” muscles can be a normal part of human muscular development, their presence demonstrates that human embryos maintain the genetic and developmental processes to form the muscles that were common in our primate ancestors. This is good evidence that human and ape embryos share many similarities during their development and calls for further research into how primate muscles develop and why some ancient muscles persist in humans after birth.

Do Nice Apes Finish Last? It’s Complicated. Despite their natural cooperativity, adult bonobos appeared to favor both humans and cartoon characters that are unhelpful.

Chimps can tell when you believe something false In a clever test used on toddlers, researchers have learned something new about the social intelligence of apes

Origin of vertebrate notochord seriously much older than previously thought

Original study: Muscles Lost in Our Adult Primate Ancestors Still Imprint in Us: on Muscle Evolution, Development, Variations, and Pathologies

The study was done at: Howard University College of Medicine; University of Maryland Medical Center

The study was funded by: National Science Foundation

Featured image credit: "The Anatomy of the Bonobo" by Hannah Newey is licensed under CC BY-NC-SA 4.0