Osteoblasts are cells that are responsible for bone formation. A lack of osteoblasts will cause osteoporosis – a disease that occurs when the body has too little bone. The current treatments for osteoporosis either slow down bone resorption, or promote the growth of osteoblasts. However, these treatments are often expensive, with serious side effects. Therefore we need to explore and identify a safer drug that addresses these issues.

Psoralea fructus is a Chinese medicinal herb that is used for treating osteoporosis. Corylin is a naturally occurring compound isolated from Psoralea fructus, which has antioxidant and anti-inflammatory properties. Although these properties are reported in other studies, it is unclear how Corylin affects bone development. 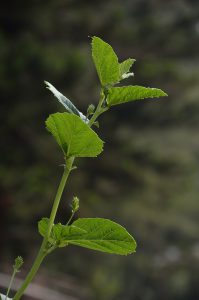 This is what Psoralea corylifolia looks like. The “fructus” is the fruit of this plant. It grows in China. Biswarup Ganguly / CC BY

This study found that corylin was able to stimulate the process, in which an unspecialized cell (cell that has the ability to develop into different kinds of cell) is converted into an osteoblast. The activity of an enzyme called alkaline phosphatase could be used to indicate the presence of osteoblasts and the formation of new bone. Results show that corylin increased the amount of alkaline phosphatase in the cells. The longer the osteoblasts were allowed to sit in the corylin solution, the more enzyme activity was detected.

Another way to see the effects of corylin is in the genes. Genes can tell us if bone is being formed. Since genes tell the cell how to make certain proteins, we can look for evidence that the genes are turned on by looking for those proteins. In this study, as the cultured osteoblasts were incubated in corylin, there was an increase in these proteins. These protein markers suggest that more osteoblasts are produced in the presence of corylin.

Bone formation is promoted by a chemical signal called β-catenin. This protein tells cells to start reading instructions for making bone. Corylin also binds to a receptor on the outside of the cell which tells the cells to stop breaking down the β-catenin in the cells. This allows a build up of β-catenin in the body, which allows the cell to start making bone. Without corylin, the body will automatically degrade the β-catenin.

Estrogen, a well-known sex hormone, plays an important role in bone formation and loss. Bone breakdown is inhibited by estrogen. Since corylin is similar in structure to estrogen, it also inhibits bone resorption, which increases bone density in the body.

Due to the high cost and well-known side effects of current drug therapies for osteoporosis, it is important to explore for alternative drugs. In this study, corylin was found to activate biochemical reactions involving two important molecules — β-catenin and estrogen –  to increase bone formation and decrease bone resorption.

The study was done at: HKUST Shenzhen Research Institute (China), The Hong Kong University of Science and Technology (China)