Every farmer knows that crops need water to survive. But what if the water starts to disappear? As a result of climate change, arid places like the midwestern United States are getting less rainfall and longer droughts. During these droughts, farmers are often forced to let food go to waste, picking only a few of their fields to keep watering. Fortunately, there may be a solution to these drought challenges that lie in the same soil that has seemingly dried up.

Mycorrhizal fungi, a type of fungus that lives in soil, have been forming beneficial connections with plant roots for millions of years. In ecosystems such as rainforests, these mycorrhizal fungi can act as root extensions allowing plants to access nutrients and water that are meters away! Considering how helpful mycorrhizae are in rainforests, a team of scientists from Rajarata University in Sri Lanka decided to see if these fungi could also help mitigate the impact of drought on an essential food crop, soybeans.

To investigate if adding mycorrhizal fungi to the soil improves the growth and drought resistance of soybeans, the research team at Rajarata University grew soybeans in pots and watered them daily with four different watering schedules: 200 ml (plenty of water), 150 ml, 100 ml, or 50 ml (very little) per day. They then used the same watering schedules for a second group of soybean plants, only this time, they added mycorrhizae to the soil. To get mycorrhizae, they collected it from the soils around some corn plants that tested positive for mycorrhizae. After one growing season, the research team collected information on leaf area, proline concentration (a leaf chemical that indicates if the plant is stressed out), photosynthetic rate, and the number of soybeans produced by the end of the growing season. 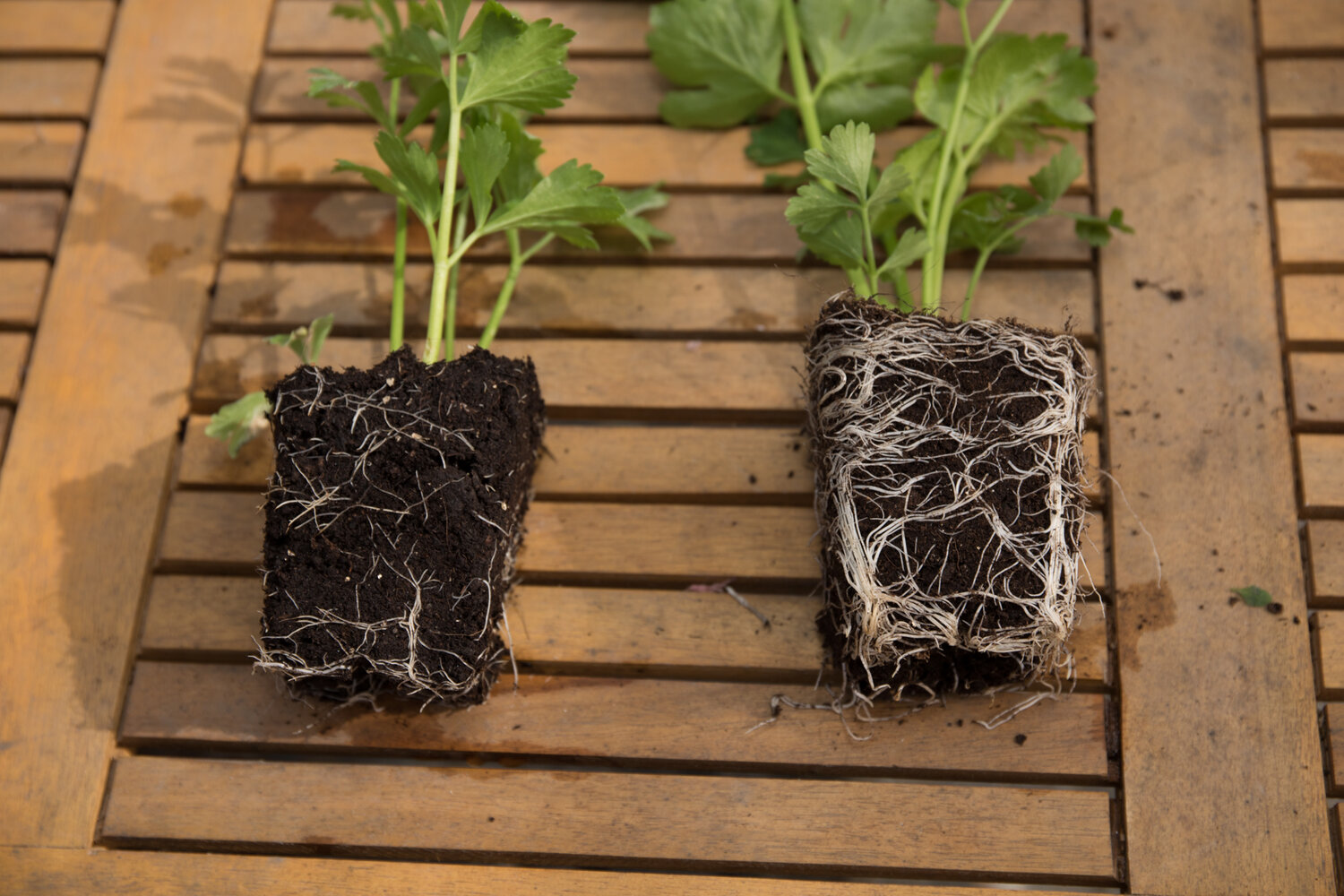 Image on the right shows more root development after adding mycorrhizae. (These are not images from the study in question) Image source: Edrosenthal.com Photo taken by DYNOMYCO

What were the results of the study? It turns out that adding mycorrhizae to the soil was a huge help for the soybean plants, especially in drought conditions. Adding mycorrhizae not only helped the plants get more water out of the soil, but it also allowed them to grow faster and make more soybeans then plants without mycorrhizae. Also, mycorrhizae helped pots hold more water in the soil by absorbing it like sponges. This means plants could use more of it before the soil dried up.

In the smallest watering simulation (50 ml/day), the researchers saw the rate of photosynthesis double in pots with mycorrhizae. Also, leaf area, soybean yield, and growth rate all increased in pots with mycorrhizae. Overall, plants appeared less stressed when the fungus was added as indicated by their proline concentration. It decreased by one-third in mycorrhizae-colonized plants, suggesting that plants had an easier time finding water and nutrients when mycorrhizae were in the soil.

From these results, the researchers concluded that soil moisture content, soybean drought tolerance, and soybean yield all increased substantially with mycorrhizal fungi.  Therefore, fertilizing crops with mycorrhizal fungi has great potential for growing plants under the stress of drought. As the global population continues to rise, droughts are affecting farms beyond the United States and across the globe. Mycorrhizal fungi may be the key to growing the food we all rely on.

The study was done at: Rajarata University of Sri Lanka

The study was funded by: Rajarata University of Sri Lanka

This summary was edited by: Jocelyn Solis-Moreira