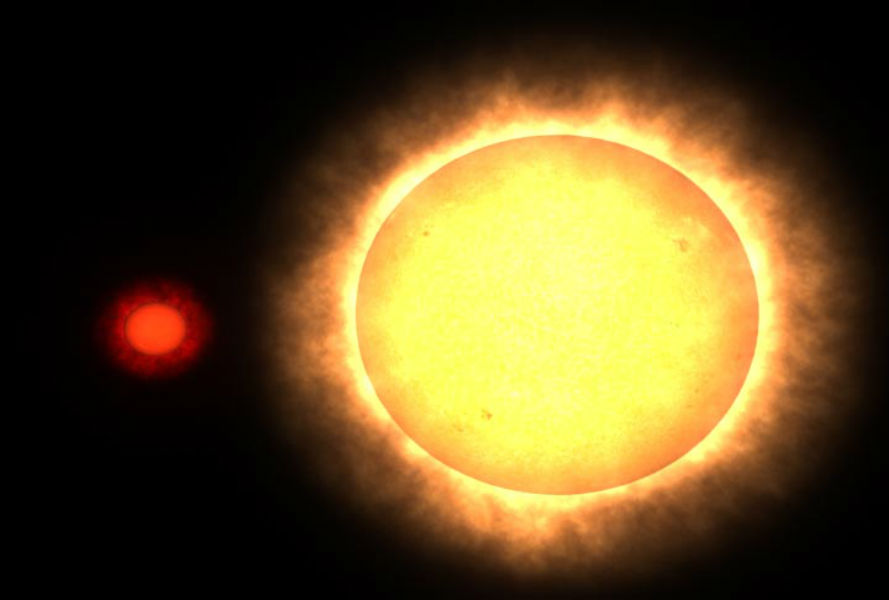 The yellow sun in our sky provides the light and energy needed to sustain our planet. Yellow “dwarf” stars like the sun are common in the galaxy, but they are not necessarily the most abundant. In fact, there are over ten times as many smaller red dwarf stars than yellow dwarf stars like our sun. Observations of exoplanets, which are planets outside of our solar system, have also shown that rocky, potentially habitable planets are just as common around red dwarfs as yellow dwarfs. Red dwarf stars provide plenty of places for the development of possible intelligent life.

Jacob Haqq-Misra, Ravi Kopparapu, and Eric Wolf attempt to address this question in a recent paper titled “Why do we find ourselves around a yellow star instead of a red star?” and published in International Journal of Astrobiology. These researchers use statistics to answer this question by considering the relative size of the habitable zone around yellow versus red dwarf stars. The habitable zone describes the region around a star where a planet can sustain liquid water on its surface. Water is necessarily for all life on Earth, so the habitable zone around a star is a region that astronomers can readily search with ground- and space-based telescopes. This new study examines the probability of finding oneself on a planet in the habitable zone of a yellow dwarf star, compared to a red dwarf. The results show that even though red dwarfs are much more numerous, they have a narrower habitable zone than yellow dwarfs, so our existence around a star like the sun is actually to be expected.

But red dwarf stars have longer lives than yellow dwarf stars like the sun. Just like a two-door coupe gets better gas mileage than a heavy truck, red dwarfs consume their fuel slower and over a much longer period of time. In the distant future, red dwarfs will live thousands of times longer than yellow dwarfs. The question to ponder then becomes: If these red dwarf stars will eventually become the predominant place for conscious observers to develop, then why do we not instead find ourselves around a red dwarf star billions or trillions of years into the future?

This study also considers that red dwarf stars will be even more numerous in the distant future of the universe, due to their much longer lifetimes than other stars. The statistics for this aspect of the problem suggest that our existence around a yellow dwarf star today, compared to a red dwarf star in the future, might be slightly unlikely—similar to finding oneself born ambidextrous or with perfect pitch. Although most of us are not ambidextrous, we might know someone who is. Events like these may not happen all the time, but they are common enough that an ambidextrous person does not think of themselves as an impossible freak accident

On the other hand, maybe life is wholly impossibly around red dwarf stars, and yellow dwarf stars really are the best place for conscious life. But then again, maybe the type of life that develops on a planet is more intricately linked to its host star than we think. Perhaps red dwarf stars could develop intelligent life of their own, but only forms of life that are drastically different from our type of conscious life. If this is the case, then our best chance of searching for life we could recognize is to search for planets around other yellow dwarf stars like ours.

890010cookie-checkWhy is the Sun Yellow? Red dwarf stars are much more common, so are we a fluke?yes

Original study: Why do we live around a yellow star instead of a red star?

Seven Earth-sized Planets Found Around A Star 40 Light Years Away Three of them are in the habitable zone!
Switch to mobile version